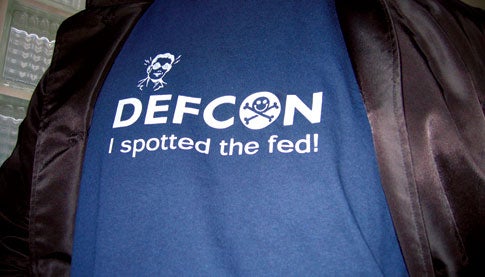 I spotted the fed!

I spotted the fed!

â€This must be the new trick this year; they said â€OK, don´t shave,´ â€ says Priest, a Def Con â€goonâ€ (that is, a conference security guard and friend of organizer Jeff Moss). Priest is supposed to be introducing a panel presentation on wireless security, but instead he´s talking to an otherwise clean-cut attendee with a two-day beard and a nervous smile. Until a moment ago, the 40-something guy with the stubble had been sitting quietly in the audience. Then a kid in his row decided he looked suspicious. Now they are both onstage, and Stubble is answering questions.

Stubble doesn´t want to discuss his rank or job description, but he admits that his employer is the Department of Defense, though he doesn´t want to get too specific-â€just DOD, one big happy familyâ€-so Priest thanks him and sends him off to get a new shirt. At Def Con, Fed-spotting is such a popular activity that both the winners and losers get T-shirts: â€I spotted the Fedâ€ and â€I am the Fed.â€There has always been tension among hackers and the men who work for TLAs (government agencies generally known by three-letter acronyms). In 2001 the FBI arrested Dmitry Sklyarov the day after he presented at Def Con. Sklyarov, a cryptographer who worked for a Russian company named ElcomSoft, was charged with violating the Digital Copyright Millennium Act. The charges against him were later dropped.

By 2004, though, the hacker-Fed relationship had become more symbiotic than antagonistic. At a panel presentation called Meet the Fed, self-outed Feds from agencies ranging from the Post Office to the FBI were actively recruiting. Some brought T-shirts to give out; others described government scholarships and loan-forgiveness opportunities.

â€Playing defense is harder than playing offense. I would urge you all to take your talents and your energy and your aggressiveness and play defense,â€ said moderator Jim Christy, director of the DOD´s Defense Cyber Crime Institute. He asked audience members who hadn´t â€crossed the lineâ€ to come talk to him. The audience response was enthusiastic but cautious-about half of the questioners wanted Christy to elaborate on where that â€lineâ€ lies.