Take Back Your Cell

How I learned to stop worrying and love the smartphone 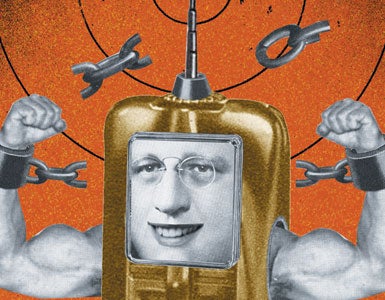 I love the Internet because I can plug anything I want into it. No ISP tells me what computer I can use or what software it can run. Contrast that with the phone networks. Until 1968, it was illegal to even attach a non-Bell phone. Even today, phone companies charge for services like Caller ID. Imagine if your ISP charged you for seeing the “From” line in your e-mail.

Mobile-phone companies have inherited this arrogance, building their business models around nickel-and-diming customers. They sell you phones that can play musical ringtones and then force you to buy the song snippets you want to use, even if you already own the CD. They give you color screens for
better gaming but charge you $7 for Tetris. They give you data but lock you into their Web browsers and charge you by the second to use them. Unlike my PC, there’s no freeware and no choice.

Yet I’m a net-head who learned to love phones again–specifically, smartphones such as the Sony Ericsson P900, the Nokia 6620 and the Treo 650. All come with operating systems ready to run software of your choosing because they’re made by manufacturers who treat you, not your carrier, as the real customer. If there’s something you want your phone to do, chances are that someone has built an app to do it that you can download and install, without paying the carrier’s monopoly pricing. When you can do that, the phone is truly yours.

How significant is this? Ringtones are currently a multimillion-dollar
market. But my P900 shipped with a built-in utility for playing any MP3s as ringtones (and even if it hadn’t, there are several third-party players available that I could have used). Instead of selling me out to some record company that wants me to buy my music all over again, in five-second chunks, the P900 empowers me to create my own rings. This week, I use Looney Tunes samples I found online. Next week, it might be Star Wars clips or bits of TV theme songs from my boyhood. It’s my phone, and I’m in charge.

The P900 and Nokia 6620 use an operating system called Symbian that, like the Treo’s PalmOS, allows anyone to write and publish software for it. With smartphones, as with PCs, hundreds of third-party apps exist–both homemade and commercial–and you can install anything you want.

“The hackability of the current crop of smartphones means not being stuck with what the manufacturers and carriers deemed necessary or acceptable for your day-to-day,” agrees Rael Dornfest, chief technology officer of O’Reilly Media and editor in chief of the cellphone blog mobilewhack.com.

Here’s an example of what he’s talking about: One thing net-heads hate is long-distance calling. (When was the last time you paid for a “long-distance” e-mail?) I’m an expat who lives in
London, and my long-distance bills could be nearly as high as my rent. Those scratch-off cards sold in convenience stores allow me to call anywhere on the globe for as little as a penny a minute, a tiny fraction of what my carrier charges, by dialing a local number and a PIN before making the call. But these things are a pain to use with mobile phones, in which numbers (especially those 14-digit overseas ones) are committed to the address book instead of your memory. You have to dial the call-in number and the PIN, pull the phone away from your head, quickly look up the number you’re calling and write it down, and then go back to the phone and dial it in.

With the right programming, my P900 could automate all those steps. I could tell it my current PIN, and every time I hit an international number in the phone book, or even started to dial one, it would automatically route the call through my card, shaving a fortune off my long-distance bills. No carrier is ever going to give me the application to do that, but as long as one other person deemed it useful and built it, I could have it too. Or I could buy a “Symbian for Dummies” book and
create the app myself.

The good news is that this, more than the carriers’ current pickpocket scheme, represents the future of mobiles. “More Nokia smartphones are already sold than all PDAs combined, and very soon smartphones will surpass personal computers in sales volumes,” says Antti Vasara, vice president of technology marketing and sales at Nokia. “Smartphones will be for the next decade what the PC was for the ’90s.”

For the first time in a long time, phones are getting me excited again–and they should be exciting you. When you go shopping for your next phone, get one that you can install software on. Not because you’re going to write any code yourself, but because the freedom to install someone else’s code is the freedom to break out of the phone-company strongbox, to choose what your phone does and when, and how much it’ll cost you.