You're not limited to Microsoft's built-in functionality 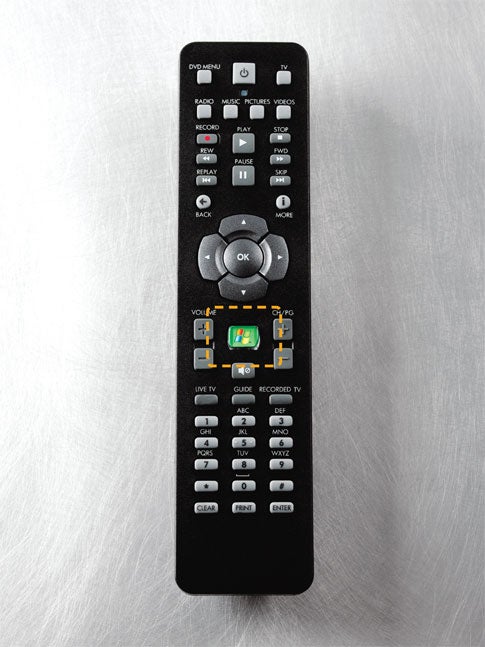 One of the strongest points of Media Center Edition 2005 is that you’re not limited to the Microsoft’s built-in functionality, such as photos, music, etc. In fact, dozens of third-party plug-ins for the OS exist and more are being built all the time. Under the Online Spotlight menu, you can find extra downloadable or streaming content from providers such as ESPN and Napster–these come ready to go out of the box, and Microsoft will automatically add more through software updates. But there are also unofficial third-party apps you can add yourself and access under the More Programs menu. Check MCE enthusiast site The Green Button for a frequently updated list of these types of plug-ins and applications. Here are some of our favorites in both categories:

CinemaNow and MovieLink
Want to watch a movie–now? Use your remote to browse through CinemaNow’s library of more than 2,000 titles from studios including Disney, Fox, Lions Gate, Miramax, MGM, Sony and Warner Brothers. Standard films are available on a streaming or download-to-own basis; a handful of documentaries in high-definition, at 720p resolution with 5.1-channel surround sound, are available for download-to-own only. CinemaNow’s pricing varies widely from film to film, but expect to pay somewhere between $3 and $20. MovieLink has a library of about 1,500 standard-definition movies that cost $3 to $5. Movies are downloaded (though you can start watching before the download is finished) and stay on your hard drive for 24 hours after you begin watching.

Napster Media Room Edition
Access Napster’s more than one million songs and 50 interactive radio stations from the comfort of your couch. The service’s TV-friendly interface also provides Billboard charts, artist photos and album art, and even music videos. Also included is Napster To Go, which enables you to download music to your portable devices and share music with Media Center Extenders, receivers that can retrieve content from your Media Center PC. $10 a month to subscribe; $1 per song to download.

NewsGator Media Center Edition
Keep up on the latest news with a customizable news ticker at the bottom of your screen. Pick your information providers–the New York Times, CNN, and just about any blog to name a few–from millions of RSS and Atom content feeds. Icons on your ticker indicate when there’s audio or video content. From $6 to $20 a month depending on the number of feeds you want.

ArcSoft QuickDVD; $90
Making a DVD of your home movies or pre-recorded TV shows is as easy as picking up your remote control with ArcSoft QuickDVD. The software quickly guides you through selecting a menu layouts and backgrounds, and inserting titles.

Muvee autoProducer MCE
You supply the music and video footage, and Muvee autoProducer MCE automatically selects the key scenes and creates a professional quality video, complete with style effects and transitions in keeping with the music. Finally home movies worth watching–in minutes. (Not available for separate purchase, only bundled with certain machines.)

Homeseer Media Center Edition Plug-in; $60
Homeseer makes home automation control software, and this plug in adds that functionality to your MCE interface. Control lighting, thermostats, security systems–virtually any hardware networked with home-automation standards such as X10 or Zwave. For the truly geeky, the interface is even scriptable, so there’s very little it can’t do. Like other Homeseer software, you can also control it over the Web or from a cell phone. HAI’s Home Control is a similar plug-in that works with HAI’s Omni line of home automation products.

Home Organiser; $20
KMS Software makes Contacts, Calendar and To-Do applications for MCE–Home Organiser combines the three into one package. All are pretty basic, but get the job done. MCEContacts ($20) can import contacts from your Outlook address book. (The same developer makes a nice free weather plug-in called mceWeather).