Everything you need to know about your next personal computer, a digital-media wunderkind you can control without ever leaving the couch 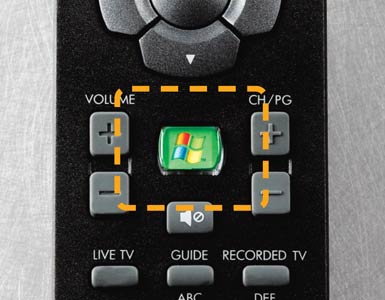 The reason you own a personal computer has changed. These days, it´s far more likely to pump out music, photos and video than spreadsheets and text documents. Yet the way you interact with it hasn´t caught up: alone in an office, two feet from the screen, clicking away with a mouse and keyboard. There ought to be a better way.

Companies have nibbled at the entertainment-focused PC interface before, but it took Microsoft to finally nail it, with the recently released Windows XP Media Center Edition 2005, the third and best iteration of a special version of XP that looks and acts like a standard PC-until you unleash its alter ego.

Push a button on the remote control, and suddenly you´re looking at a full-screen large-type menu with choices such as My Pictures, My Music and Play DVD. This so-called â€10-foot user interfaceâ€ is readable from across the room and easily navigated with the remote, so you can start a playlist or slideshow without leaving the couch. Most Media Center PCs also include a built-in TV tuner, allowing you to watch, rewind, and record live TV on your monitor or a connected set. There´s even a free onscreen guide to schedule recordings.

Want more? How about Internet and FM radio, and movie and music downloads from vendors such as CinemaNow and Napster, all from the same interface. Then there are the optional Media Center Extenders that stream all the content on your Media Center PC to any TV in the house, not to mention the new Portable Media Centers that sync with your PC so you can take recorded shows or ripped MP3s on the go. Perhaps the most impressive feature: Media Center PCs typically cost only around $50 more than a similar box sporting plain XP.
Ready to buy? Start with our Specs Cheat Sheet for an anatomy of the Media Center PC, then browse our nine favorite machines on the following pages, as well as a few devices that can approximate the Media Center Edition experience on your current rig.