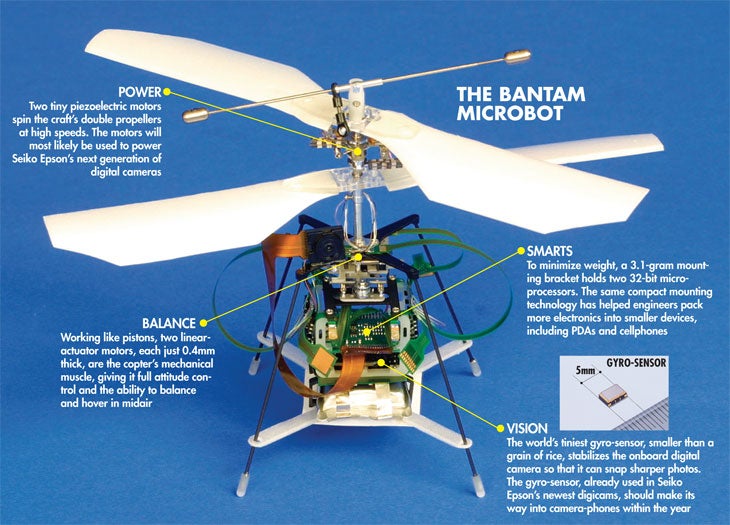 Dangerous, dirty jobs, such as sifting through earthquake rubble and investigating nuclear-waste spills, are best left to ‘droids. That’s one reason why the Japanese electronics giant Seiko Epson has built the world’s smallest and smartest autonomous flying microbot. Weighing just 12.3 grams and measuring 3.35 inches tall, the wireless FR-II is tiny enough to slip into a mine shaft or buzz about an office building in search of explosives.

More than just a feat of miniaturization, the flying robot boasts unprecedented power for its size. Four of the world’s thinnest ultrasonic motors lie at the heart of the microbot. Two of the motors power counterrotating blades, enabling the FR-II to lift off the ground and turn on a dime; the other pair stabilize the craft during flight, control pitch, and help it hover in midair.

The brain of the machine is a set of two 32-bit microprocessors. Unlike most tiny aerial vehicles, which are remote-controlled, the FR-II uses its processing power to autonomously navigate preprogrammed flight paths. A Bluetooth-enabled digital camera can even snap and send images en route. The images are still too fuzzy for real reconnaissance missions, but Seiko Epson spokesman Alastair Bourne says that future robots, carrying lighter, more advanced cameras, will be able to “fly into the debris after an avalanche or mine explosion and beam back pictures and location information of victims.”

Before the craft can report for duty, though, Seiko Epson must extend its flying time well beyond the current three minutes delivered by its 4.2-volt lithium-polymer battery. Like many electronic devices, “the craft’s major technological limiter is battery life and size,” explains microbot researcher Ron Fearing of the University of California at Berkeley.

A consumer version of the search-and-rescue prototype could be available within the next two years. In the meantime, the robot’s energy- and space-
saving parts should find their way into cameras, cellphones, digicams and GPS systems by the end of this year.