Sony's latest robotic pet can talk like a human--now you can decide what kind of human. 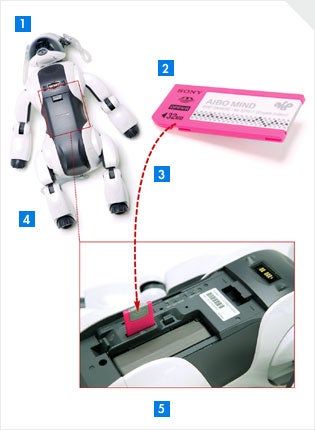 While most Sony AIBO owners are content with the pet’s pre-packaged dog mimicry, it has long been a favorite toy of hackers, who do things like control it remotely from a Sony Cli PDA, program it to snap photos and post them to a moblog, even teach it to disco with other dogs (chest hair and medallions sold separately).

Early on, Sony threw a fit over these onClick=”window.open(”,’popup1′,’height=150,width=325,scrollbars=yes,resize=yes’)” target=”popup1″ class=”sidebar”>mods (click on a blue word for its definition) and sent several threatening letters to the owner of aibopet.com, a site that collected various hacks and tricks for the AIBO, saying that he had violated the company’s copyright and trademarks. (An alternative theory in the hacker community was that Sony didn’t like free user-developed hacks competing with its own expensive software add-ons.) A massive outcry from AIBO owners eventually forced Sony to back down, and aibopet.com’s replacement, aibohack.com, is going strong, with dozens of mods for old and new models. Start with a simple one for the new ERS-7 model (see “Changing the Voice,” below), then check out “Other Tricks” for a sampling of more advanced hacks.

The ERS-7 is the first model that talks with a human-sounding voice, but it’s annoyingly chipper. Here’s how to class up your robo-pet with a crisp English
accent. (More voices are available at aibohack.com. Click here to learn how to make your own.)

1. Open the panel on the AIBO’s “stomach,” and remove its Memory Stick. Pop the Stick in a Sony-brand card reader, and back up its contents on your PC.

3. Unzip the downloaded file, browse to the “p” folder, and copy the file called “AUDIO.ODA” to the same folder (“p”) on the
Memory Stick.

4. Pop the Stick back in your AIBO, boot it up, and tell it to “take a picture.” Note the refined British response. Jolly good!

5. To revert to the original voice, just replace the “AUDIO.ODA” file on the Memory Stick with the file in the back-up folder you made.

Instructions and files for all at aibohack.com. Disco AIBO Teach your AIBOs (if you’re lucky enough to afford more than one) to get down together. Scooby AIBO A little late for the sequel but still a crowd-pleaser: turn your AIBO into Scooby-Doo. Simpsons AIBO Give your robot a personality based on either Bart (rambunctious) or Homer (lazy) from The Simpsons. Both will sing the theme song on start-up. AIBO Scope With a onClick=”window.open(”,’popup1′,’height=150,width=325,scrollbars=yes,resize=yes’)” target=”popup1″ class=”sidebar”>Wi-Fi network and the ERS-7’s included wireless card, you can see exactly what your AIBO sees as it wanders your house.