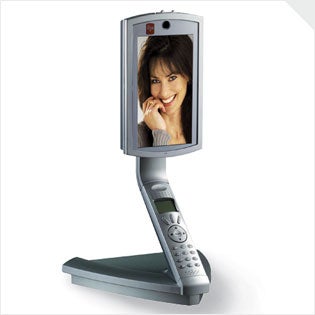 We just moved to a new city, separating two-and-a-half-year-old Lucy from Grandma and Grandpa. Now their visits send her into irrepressible paroxysms of delight. Grandma and Grandpa miss her too, their stiff upper lips quivering just a bit at the end of phone calls.

Enter PopSci Dad with the WorldGate Ojo videophone, a VoIP-based device coming from Motorola this fall that transmits a TV-like 30 frames per second. Although it’s aimed primarily at businesses (a pair costs $1,400), I hoped it would work as well in a living room as a boardroom. Based on Lucy’s wide-eyed reaction to first seeing Grandma’s happy mug on the 7-inch LCD screen, the answer is a definitive yes. Grandma got the ball rolling by asking what Lucy did that day. “We went to the playground!” she shot back, instinctively holding up a small, unrelated toy to show Grandma. “Ooooo, look at that!” Grandma cooed.

Set-up was plug-and-play. Video and voice were perfectly in sync, and there was no child-scaring pixelation or low-framerate jumpiness. The phone worked so well that it quickly became invisible to Lucy–she simply saw Grandma.

My one complaint: The eye-level vertical screen should rotate. It’d be nice to squeeze Grandpa in too.