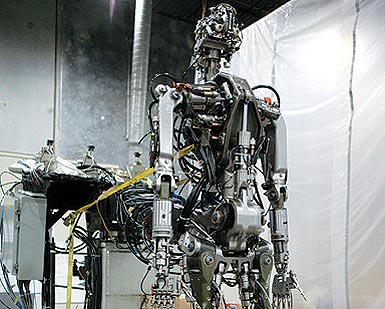 He’s 6 feet 8, 650 pounds, and he’s got 40 different moves. If Universal Studios Orlando’s new animatronic mummy ever plays ball, make sure he’s on your team. The creature is the namesake of the $80 million Revenge of the Mummy thrill ride, which opened in May. Built of thousands of parts that are articulated by 1,000 feet of 4,000psi hydraulic tubing, the robot has four times the technical agility of state-of-the-art animatronics. All this equipment goes toward mimicking the countless motions that make up human movement. Universal has developed new force-feedback algorithms to perfectly emulate the speed and fluidity of an (undead) human. A control computer monitors the position, velocity and force of every twitch to make sure he doesn’t run amok during his 15-second choreographed appearance–which he performs more than 1,500 times a day. Like we said, the guy’s got hustle.