Make your own letterboxed movies with native widescreen video gear. 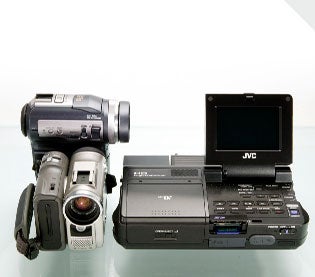 If your home videos never quite have the gravitas of Hollywood epics, you can always blame the aspect ratio–the boxy, 4:3 standard TV format. Or you could have. New camcorders that shoot in native widescreen (16:9), paired with a portable HD editing deck, will present your work in true cinematic style.
Though the past few generations of camcorders offered widescreen as a shooting mode, they were actually cheating you. They simply lopped off the top and bottom of the frame to give the appearance of widescreen–a technological sleight of hand that renders an image with lower resolution than you’d expect from these cameras. The latest models below use CCD sensors that give you the real deal.

Sony’s DCR-PC330 (see photo, top left) delivers a native 480-line widescreen signal, plus the world’s first 3.31-megapixel camcorder stills with its CCD sensor. It has just about every feature you’d expect at this level: zero-light shooting mode and image stabilization. And some you wouldn’t: a pop-up flash for taking digital stills indoors and a hologram autofocus system whose crosshatch infrared pattern judges distance to your subject in low light much more accurately than other metering systems. $1,700; sony.com

Sharp’s Viewcam VL-Z800U (bottom left) goes widescreen with a native 16:9 sensor, a CCD that also snaps 1.33-megapixel digital stills. The lens won’t hold you back either, given its 10X optical zoom and its whopping 700X digital zoom–more than twice the industry standard. The grip rotates 240 degrees, so you can shoot from just about any angle, and a built-in LED provides adequate light to capture video in a blackout. Not bad for 1.12 pounds. $600; sharpusa.com

Can’t wait until you get home to relive the high-def highlights of your vacation? Pack JVC’s CU-VH1, the first HD handheld editing system. It’ll take a feed from any camcorder, mix together high-definition, standard digital and analog clips, and then spit out the mix in digital format. It also down-converts HD material for playback on standard TVs or up-converts standard-definition material for HDTVs. The 2.6-pound unit’s inherent drawback is its diminutive 3.5-inch screen. $2,000; jvc.com