Microsoft's game box is really a powerful PC--here's how to unlock its potential without getting caught. 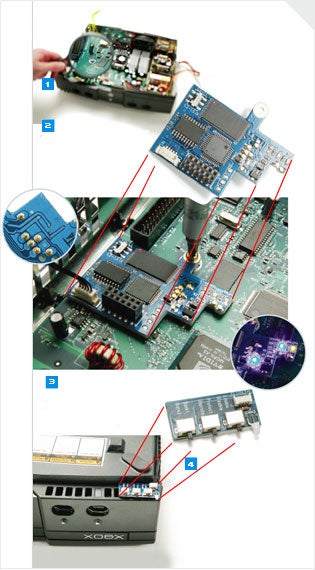 For hackers, the X in Microsoft’s Xbox might as well stand for Pandora’s.

Xbox hacking is the subject of a controversial new book, Hacking the Xbox (No Starch Press; $25), and the focus of a passionate geek uprising.

Xbox hacks alter the basic code, called the BIOS, to let it run Linux (see “The Chipless Linux Install” below) or, with a mod chip, any other code you can find or write. These chips are soldered onto the motherboard and give you not only a full Linux PC but an Xbox that can back up games to the hard drive, emulate other consoles, even play wacky Japanese import games. Better still, the mod chip can be turned on and off with an external switch, so Microsoft never has to know it’s there. (The company can detect?and ban?BIOS-modded boxes on Xbox Live.)

While Microsoft clearly doesn’t approve of the chips, it hasn’t sued any hackers … yet. But Microsoft, Sony and Nintendo have won several multimillion-dollar lawsuits against mod chip manufacturers and distributors. Last year, a 22-year-old Virginian named David “krazy8” Rocci got five months in the slammer and $28,500 in fines for selling hundreds of mod chips through his site, isonews.com.

The feds won’t knock on your door for buying or installing a mod chip, but doing so will void your warranty. And because you’re messing with fundamental code, potential for permanent damage is high. So before you open this box, be certain you’re ready for what’s inside.

These are the basic steps to a solderless install of the X-Ecuter 2.3b LITE Plus chip ($52; system-mods.com). Note that using any mod chip to pirate games or circumvent the Xbox’s copyright protections is
illegal under the Digital Millennium Copyright Act.

2. Locate LPC and d0 points, where mod chip will connect. Use X-acto knife to carefully scrape away lacquer from around d0 point.

3. Align small points (inset above left) on bottom of chip with holes. LEDs light up when d0 point is connected properly. Screw chip down.

4. Run wire for external switch through front vent hole and attach switch to front lip of Xbox. Turn Xbox on. Cromwell screen means success. More detailed instructions for this and other chips, as well as guides for using your modded Xbox, in the related links section (upper right) of this page.

If all this talk of chips makes you squeamish, don’t worry: You can get Linux on your Xbox in half an hour without even turning a screw. The software install method below was developed last year by a group of hackers spurred on by a $100,000 prize offered by Michael Robertson, CEO of Lindows, to the first team that successfully ported Linux to the Xbox.

While installing Linux this way will not give you all the functionality a mod chip would, you’ll still be able to make your Xbox do just about anything a PC does: run Windows programs (through an emulator), play MP3s and MPEG video, surf the Web, even act as a server. Check out xbox-linux.sourceforge.net for detailed tutorials and software.

THREE WAYS INTO YOUR XBOX

How Sneak new code into the Xbox’s processor through the game MechAssault.

Why not Can’t use Xbox Live?Microsoft can detect a Linux install and ban your box.

How Solder two points on the box’s main chip so it will accept a new BIOS.

Why Gives you a full 733MHz Linux PC for $200, with replaceable hardware (not possible with software hack).

Why not No longer plays Xbox games.

How Bypass Xbox’s main chip so you can run a new BIOS alongside the default.

Why Enables endless mods, including Linux, and can be turned off with a switch.

Why not not Complex hardware and software install.