This year's must-have convergence device gets a lot cooler with a few essential extras. 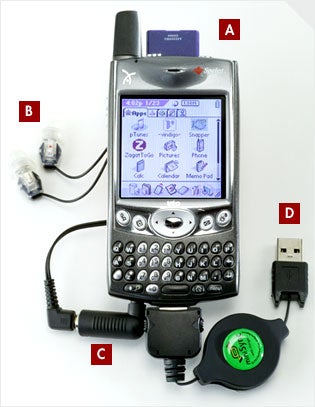 For all of the hype the digital lifestyle gets, actually living it used to be kind of a chore. Carting no less than five devices through an airport a few months ago, I stopped and stared wistfully at the simple genius of the pay phone, which looked lighter than all those gadgets in my pockets.

Handspring’s new must-have device is a phone, PDA, digital camera and MP3 player rolled into one. And for my money — though, granted, a not-insubstantial amount of
my money — it’s the first such device that performs all of
its functions competently enough that I could replace my arsenal of gadgets, and their menagerie of adaptors, with a cherished Single Device. Cue choir of angels.

But convergence nirvana
doesn’t come cheap. Sprint, AT&T, Cingular and T-Mobile all offer the Treo for $300 to $600 plus monthly data and voice plans. (Currently, Sprint offers the best data deal:
$5 a month for unlimited
Internet.) And then there are the accessories. Thousands are available, but here is my short list of essentials.

For listening, I use $140 Etymotic ER-6 Isolator headphones (B) (etymotic.com), the best-sounding head gear I’ve tested. But since the Treo’s headphone jack is 2.5mm instead of the more standard 3.5mm, I had to pick up Handspring’s $6 adapter (C) (handspring.com).

Finally, since I travel frequently, I’ve replaced the Treo’s clumsy syncing cable and charger with a BoxWave MiniSync charge and sync USB cable (D) ($16; boxwave.com). The retractable cable coils to less than 1.5 square inches — small enough that I carry a spare in my pocket.

My favorite Treo app, hands down, is PdaNet ($34), which turns my Treo into a modem for my laptop via the sync cable, at speeds of 70 to 100Kbps anywhere I get a cell signal. Pocket Tunes Deluxe ($25) allows me to stream thousands of commercial-free Shoutcast Internet radio stations over the device’s Web connection. For e-mail I prefer the $50 SnapperMail Premier, which automatically downloads mail from a POP3 (or IMAP) server on a regular schedule and chirps when I have new messages. It also has an interface mode for use with a thumb or index finger, so I don’t have to pull out the stylus just to read messages. LauncherX 1.1 ($19)
is an incredibly easy-to-use replacement for the Treo’s built-in application launcher. It lets me organize my apps into tabs and quickly navigate them with a single finger.