Why can't you back up your DVDs? Because entertainment execs don't want you to 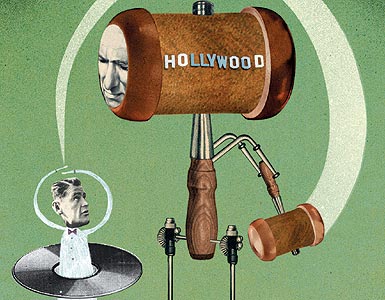 The holiday shopping guides were all atwitter over the new DVD formats, Blu-Ray and HD-DVD–competing systems for recording and playing back high-definition movies. Both feature hugely increased pixel counts, more bit-depth and a surfeit of storage. But here’s an important question that goes unasked in all the hype: What features won’t your next-generation DVD device have?

It won’t have a button for making a backup copy of the DVD you just bought, or for sending the movie to any portable video player. And if you put one of these long-awaited new discs in your PC, you won’t have the option to rip it to your hard drive the way you do when you insert a CD.

No matter how pretty its picture, what you’re expected to do with a DVD today is the one thing you could do in 1994: watch it on your TV. Why? Because when tech companies created the DVD, they sold you out. They let Hollywood hold its content hostage so that they could control who gets to build players and what those players can do. Tech execs have not only rolled over, they’ve joined the other side, advocating laws and restrictions that serve the entertainment conglomerates first and us second.

If that doesn’t seem like such bad news, think about the way it used to be. When Sony created the VCR in 1976, it enabled anyone to make near-perfect copies of movies. Sony did this without permission, and Hollywood went nuts. The Motion Picture Association of America launched an eight-year battle against the VCR that culminated in a 5-4 Supreme Court decision declaring the device legal and changing copyright law to address these new capabilities. That ruling is the reason you don’t get sued for recording a TV show. (During one Congressional hearing, MPAA spokesman Jack Valenti uttered this infamous hyperbole: “The VCR is to the American film producer and the American public as the Boston Strangler is to the woman home alone.” Today, pre-recorded media earns the studios more revenue than box-office ticket sales.)

The DVD broke that system. The studios–by then aware of the lucre in home video–controlled the format from its inception by agreeing en masse to a patented encryption scheme for the discs; anyone who wanted to build a player or create a DVD feature had to ask them for the key. They set up a cartel in 1995, now called the DVD Copy Control Association (DVD-CCA), to dole out these licenses. Anyone making players without one is breaking the law. A Fox Studios executive told me, “It’s a polite marketplace.” Sure, if polite means stagnant.

Think of all the things you can do with a track from a CD now that you couldn’t do 10 years ago: rip it to your laptop, turn it into a ring tone, send it to your friends, burn a mix. Many of these capabilities are illegal, and the recording industry has tried to stop them all, but they’re out there, challenging the old rules and feeling their place in the market. Innovators have tried to enable the same flexibility for the DVD. Last year 321 Studios released software that let you back up prerecorded DVDs, but the MPAA sued it into bankruptcy before a court could rule on whether or not the product was legal.

Just last month, this magazine gave a Best of What’s New award to a $27,000 movie jukebox from Kaleidescape, praising the maker’s efforts to appease Hollywood by locking down content on the device so it can’t be shared. Kaleidescape thinks the product is within the boundaries of its DVD-CCA license, but my Deep Throat on the cartel says the group disagrees and is currently deciding how the company will be punished. Penalties range from a stern warning to fines to lawsuits. (When I called the DVD-CCA for an official line, I got this reply: “I’ve been asked to tell you we have no comment.” “Who asked you to tell me that?” “I can’t tell you.”)

The VCR exists because a behemoth with deep pockets stood up for it. But today, only easily crushed upstarts are willing to take chances, and the big tech firms are all in the entertainment business themselves. Sony recently bought MGM to secure content for Blu-Ray. Steve Jobs, CEO of Apple and of the animation studio Pixar, told studio heads and tech leaders in a private meeting that studios shouldn’t release anything for the DVD-HD format until they get a promise that recorders will never appear in a PC.

We can’t rely on the vendors to act in our interest these days, dragging the entertainment execs kicking and screaming to the money tree. The irony is that the tech companies say that this is all done in your interest, that by pleasing the studios, they can give you a device for which Hollywood might make a few movies available. But it will be on their terms, not yours.
With friends like that, who needs the Boston Strangler?