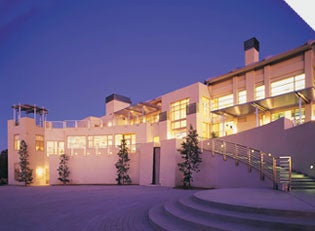 Wildfires came within a mile of Madeleine Landry’s Simi Valley, California, home last October, but she and her husband, Ed, weren’t budging. “When I asked the firefighters what to do if the fire came closer, they said, ‘Go inside, close the windows and doors, and let it go by,'” she recalls. Unconventional advice, perhaps, but then again, this is not just any house. The Landrys’ 11,000-square-foot homestead is equipped with vacuum-sealed doors, a steel frame, and an exterior clad only with steel and concrete — that is, it can survive the odd brush with fire.

The home protects against more than just heat. In an effort to reduce the need for cleaning chemicals (Madeline became extra-sensitive to them after the Landrys’ previous home was treated for termites), the steel used for the home’s touch surfaces — doorknobs, handrails, refrigerators — is coated with an antimicrobial compound, called AgION, intended to inhibit mold, mildew, bacteria and yeast. Silver ions in the compound kill microbes by disrupting their respiration.

The coating also does something else well: It masks the fingerprints that are usually so visible on stainless steel, a quality that may get it into stores sooner rather than later. Take a full, multi-media tour of the house at
akconcepthome.com.