Into the 3rd Dimension 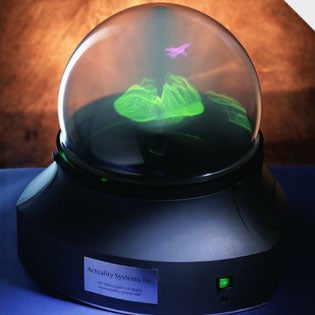 3-D technology has traveled a long and sometimes ugly road. In recent years, red-and-blue glasses and bulky LCD headsets made moving images pop off the screen, but fashion-wise landed somewhere short of fabulous. The Holy Grail has always been true 3-D without extra eyewear, and now several companies are bringing headgear-free 3-D displays to market, for applications ranging from gaming to medical imaging to battlefield simulations. Here’s a look at the leading contenders in the race to get us out of flatland.

What it looks like: 3-D pictures appear to float in front of or inside this laptop’s 15-inch flat-panel display.

How it works: A switching LCD attached to a normal LCD panel creates a barrier that controls the direction of each pixel’s light, aiming it at one eye or the other. 3ality is working on a similar solution that can be applied to CRT monitors.

What it’s used for: Videos, games, molecular modeling, computer-aided design. The technology has been sighted on PDAs in Asia.

What it looks like: A 3-D image, from 5 to 150 inches diagonally, seems to float in midair above a
projection box.

How it works: Heliodisplay agitates air to create a surface upon which it can project a 2-D image. Since the image does not appear on a physical object, the eye interprets it as a 3-D image (although it has only a single viewable side).

What it’s used for: Not yet in products but will likely be seen in both home-entertainment and
teleconferencing devices.

What it looks like: 3-D models, up to 10 inches in diameter, enclosed in a glass dome.

How it works: One hundred ninety-eight
layers of 2-D images are projected onto a rotating screen at 5,940 frames per second to create depth. The viewer’s eye merges the 100 million data points into a 3-D image that can be viewed from all sides.

What it’s used for: Medical imaging, air traffic control, battlefield visualization. You can even see plays performed inside it.

1939: The View-Master, a souped-up stereoscope, goes on sale, featuring seven 3-D images on a single disc.

1983: Mastercard is the first to put a hologram on a credit card.

1986: Captain Eo, one of the first films to use LCD shutter glasses to create stunning, true-color 3-D, debuts at Epcot Center in Orlando, Florida.