Taking Spirit for a Spin 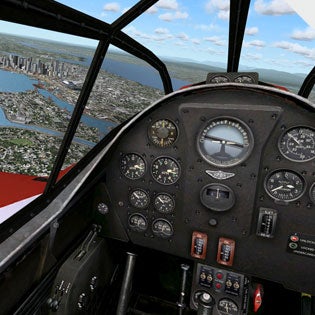 Flight Simulator 2004: A Century of Flight (FS2004) is the latest iteration in Microsoft’s 20-year series and the first upgrade in two years–and the company has taken some major steps forward with this version of its esteemed simulator.

To tie in with the centenary of the Wright brothers’ first flight, Microsoft has added nine historical aircraft, including the Wright Flyer and the Spirit of St. Louis, and a dozen historical flights. An essay by Lane Wallace accompanies each of these famous aircraft. She is a regular columnist with Flying magazine and like all the non-Microsoft contributions, her pieces are well-written and add color and context to the game. On the aircraft themselves, cockpit and exterior modeling is excellent, as with the other fifteen modern aircraft. Overall this addition will provide a genuinely new experience for many flight sim enthusiasts.

Besides the historical additions, long time fans will notice several improvements and additions in this version. Weather looks better and is more realistic. The interactive air traffic control is more flexible. As with the last version, pilots can choose between detailed but flat bitmap cockpit panels or ‘virtual cockpits’ rendered in 3D. In the new version, all the switches and gauges in the 3D cockpits work so that this view becomes a viable way of flying the plane. There are also new aircraft, including the Robinson R-22 training helicopter and, a welcome variation from ‘big iron’, the Piper J-3 Cub tail dragger. Small details like the addition of proper taxiway signage and better airport lighting serve to increase realism. Although it may daunt a newcomer, experts will find the new GPS system very useful. It accurately recreates two popular Garmin models and represents a big improvement in realism

For a new (virtual) pilot, FS2004 includes flight school. Video clips and an extensive ‘learning center’ cover everything from getting started to instrument flying. A graduated series of lessons, using the simulator itself, introduce the art of flying. Rod Machado, the game’s instructor, is a calming influence in the cockpit. His wit and careful explanations in the pre-flight briefings and in the air help the novice through the long and challenging process of learning to fly.

Once the basics have been mastered, FS2004 includes a series of adventures, or real-world missions, that provide a game-like challenge. For example, there is six-flight recreation of a day in the life of a European airline pilot. Working through flight school and all the adventures can take well over one hundred hours. After that, Flight Simulator has a global scenery and airport database so it is possible to create almost any flight imaginable.

FS2004‘s main strength is its graphics. The view from the cockpit is as good as many commercial flight simulators. Hills undulate and fade into the distance. Clouds form, billow and dissipate. Rain effects, particularly when it hits the windshield, are very impressive, and fog never looked so good. The terrain database covers the whole world, but certain areas and airports are modeled in more detail, notably the region around Microsoft’s home in Redmond, Washington. Some cities and wonders, including Mt. Rushmore, the Grand Canyon and Las Vegas, are very well-modeled. However, the generic terrain, buildings and scenery fill the landscape adequately but are less attractive and not quite good enough for purely visual navigation.

The most subtle but most important improvement is in the user interface. Microsoft did away with paper manuals in the 2002 edition but the software didn’t get easier to use at the same time. In the last version, the user had to switch programs to read the manual, get detailed flight briefings and charts. All that has changed with FS2004. Everything is available interactively within the main program and it can all be printed out for reference during flights. Not only that, but all these materials have been made more detailed and more comprehensive. It is not just a manual but an aviation primer. Similar attention to the user experience has been applied within the simulation itself. During lessons, for example, the last thing the instructor said stays visible on the screen in text form even after he has finished talking and the instruments he refers to are visually highlighted. The cumulative result is a much easier program to get into.

For real-world pilots, FS2004 has plenty to offer. For students, there is lots of good, well-written material in the learning center. The in-flight air traffic control is an effective way of getting familiar with the vernacular. FS2004 is particularly useful as an instrument trainer; practicing instrument scans and procedures. Add-on rudder pedals, an instrument stack and a proper yoke enhance the sense of being in a real plane but increase the price considerably. Luckily, for most simmers, a regular joystick is all they need to enjoy the game.

Flight Simulator has always pushed PCs to their limits. Microsoft’s minimum system requirements for FS2004 are, to put it politely, optimistic. While it might run on a 450 MHz computer with 64MB of RAM, don’t expect it to look good or run smoothly. Even on a high-end system, with everything copied to hard disk, it can take a long time to load a flight and complex scenes can cause the frame rate to stutter. Luckily, this version takes away some of the voodoo required to optimize frame rates by condensing all the different graphics options into a simplified ‘target frame rate’ slider.

Microsoft’s Flight Simulator has few rivals. X-Plane, from lone maverick Austin Meyer, is the main one. For flying schools and hard-core fans, there is Precision Simulator 744 and Elite Training System 1000, but they cost substantially more. There are, of course, lots of combat simulators but they focus more on fighting than flying.

What has put Microsoft’s product in its dominant position is not so much the fidelity of its flight model or the range of aircraft available (X-Plane wins on both counts) but the sheer breadth and depth of the product. It has something to offer a casual gamer and the most die-hard enthusiast. The addition of historical aircraft and improvements to the interface and user education in this version are considerable enhancements. It is the best-selling computer game in history and not without reason. Like real world aviation, FS2004 offers hundreds of hours of lessons, challenges and moments of sublime flying. Unlike the real world, your virtual flying career isn’t limited by funds, weather or mechanical problems. What is most remarkable about Flight Simulator 2004 is how similar the real and the virtual worlds have become.