Plugging a GPS receiver into to this new style of laptop makes navigation for both airborne and earthbound travelers a breeze. 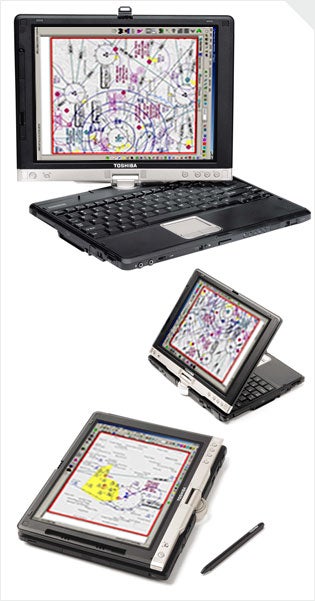 The tablet PC debuted late last year with models from Acer, Compaq, Toshiba, and ViewSonic. Now, nearly a dozen manufacturers have entered the market, and the concept seems to be slowly taking hold. Running a version of Windows XP designed especially for tablets, and using a digital stylus to function, PDA-style, as both a mouse and a pen, the computers have been touted as aides to everyone from architects and engineers to doctors and nurses, artists and designers.

Pilots may also benefit substantially from the new machines, particularly as flight-planning software and GPS-based moving-map products become integral to aviation at all levels. But outfitting a private airplane with the latest in GPS technology can run easily into the high five figures?and buying any of the specialized “electronic flightbag” units that serve similar functions to tablet computers heads quickly toward the high four digits. The tablet PC, however, is a glass-cockpit on a budget?one that you can take with you in any aircraft and which happily serves double-duty as your conventional laptop computer.

To get a sense of how well tablet PCs work in the air (I am not a certificated pilot, but I have some flight training), I conducted an informal evaluation of the Toshiba Portg 3500 tablet while flying as a passenger in a variety of aircraft, including a commercial airliner, a small Cessna business jet, and a privately owned Cessna Skymaster (a twin-engine propeller aircraft).

The tablet sports a 1.3 GHZ Pentium III processor, 512 MB of RAM, and a screen that rotates from conventional laptop configuration, with a full-sized keyboard, to the screen-only tablet?automatically adjusting the screen from landscape to portrait in the process. I installed Jeppesen’s FliteMap, the exceptional flight-planning package from the aviation chart and navigation software publisher that is intended primarily for laptops. It is made dramatically better on the tablet. [ onClick=”window.open(”,’popup1′,’height=645,width=475,scrollbars=no,resize=no’)” target=”popup1″>Click here to view screen shots.
]

FliteMap allows pilots to plan their routes using detailed, easily configurable charts and step-by-step menus. Once in the air, plug in your GPS unit?even the most basic consumer models are supported?and your position is instantly plotted on the map, which scrolls slowly beneath you as you fly through the sky. Your programmed route extends in front of you, and your track behind you in a different color. You can zoom in and out by drawing boxes with the tablet’s pen, and operate all the program’s functions by tapping the screen. By comparison, using this program on a regular laptop, especially in the cramped cockpits of most small airplanes, is a challenge, especially when you’re using a trackpad instead of the digital pen.

The other program features are equally enhanced on the tablet, including quick access to airport approach charts and runway diagrams, all of which are much easier to navigate around when you’re holding a svelte panel rather than a clunkier laptop. If you need to enter destinations or waypoints, tapping an icon on the Window’s toolbar pops up a small keyboard. You won’t want to write emails or short stories on it, but it works great for making brief entries.

Ground travelers will be similarly impressed with the tablet/GPS combination, as the map software produced by the major consumer GPS manufacturers?Magellen, Garmin?also function as moving-maps when the GPS unit is plugged into the computer. Driving across town? Watch (or, rather, have your companion watch) the little triangle blip along with you as you pass streets and cross rivers on the way to your destination.

By far the biggest problem with the Toshiba tablet is its screen. It’s barely bright enough to use in the daytime, and certainly wouldn’t work well in direct sunlight, which pilots often encounter in the cockpit (and drivers do on the road, as well). Other models are brighter, but may or may not have the attached keyboard that makes it easy to flip back and forth between tablet mode and the conventional laptop configuration?something that might come in handy in the cockpit.