They don't make toys like they used to. And we couldn't be happier about that. 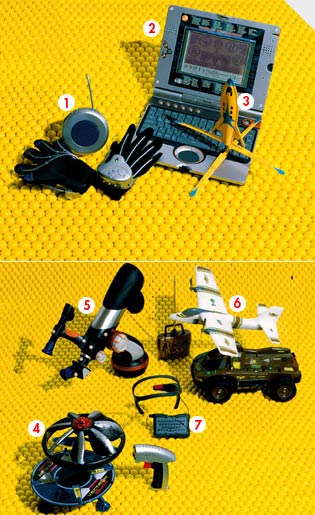 Thanks to the wonders of technology you no longer need to give your spouse gifts you secretly want for yourself. Now you can give them to your children. Cutting-edge innovations are constantly trickling down into the kids’ market, and all those smarts are starting to translate into some serious fun. Here are seven holiday gifts you may end up keeping for yourself.

Though we were unable to play “Smells Like Teen Spirit” on it, we were able to master the HandBand’s first drum lesson in five minutes. As kids move their fingers, the gloves produce musical notes, up to 10 per virtual instrument, in real time. Budding musicians can choose electric guitar, keyboard or drums, and play with or without background beats. Plug the HandBand into your sound system to crank up the volume. kgiproducts.com

Tech factor: A network of sensors in the gloves wirelessly communicates the user’s movements via radio signals to create on-the-fly gesture-based music.

If laptops were bicycles, this would be training wheels. Vtech has packed a boatload of tech into a portable that won’t break the bank (compared with the price of a laptop, anyway). We loved the clever programming, content and touchscreen but were dismayed by the pixelated black-and-white display. Our standards may be inflated, though, as it didn’t seem to faze our kid tester a bit. He spent three hours grinning as he mastered academic activities (there are 75, in subjects like math, history, English and science) and messed around with the word processor, art programs, music composer and mixer. vtech.com

SkyBlades is the 21st-century version of the rubber-band-powered balsa-wood plane. Developed by honest-to-goodness rocket scientists at AeroVironment, the rotor-propelled rocket will always right itself and fly vertically, no matter what direction you point it. We were impressed that in our test flights it took two sugar-hyped 9-year-olds 30 whole minutes to bust a blade. We almost cried, until we remembered that a) we’re grown-ups and b) it comes with replacements. fascinations.com

Chris, 9, says: “Awesome, but my arm hurts from winding.”

The Vectron Ultralite is the world’s only untethered flying saucer. Unlike remote-control planes, the Vectron is a cinch to operate: Press the trigger slowly and the little craft climbs to over 35 feet. You can’t steer, but it’ll drift with the breezes. A 3-minute charge gets 3 minutes of flying time. taisun.com

Cole, 9, says: “Kind of unrealistic. A real UFO would need to fly much longer to come from Mars.”

Most low-end telescopes are poor performers. Discovery Kids’ new SL70 refractor, however, delivers quality stargazing at a reasonable price. The mount and tripod are more stable than those found in other kids’ kits, and the scope, tripod and all accessories fit into a compact shoulder bag. The SL70’s funky looks alone will pull kids in — what they see through the scope will keep them hooked. C’mon, let â€em stay up late. shopping.discovery.com

Tech factor: The scope’s coated-glass objective pulls in many of the fainter celestial objects, including nebulas and galaxies.
Alexandra, 8, says: “I see a lot of craters! Wow!”

It’s a jeep! It’s a plane! It’s the Land-Air R/C, a twofer toy that lets you launch a remote-control plane from the back of a remote-control truck. After liftoff you can fly the plane for up to 3 minutes. The plane is said to be operational to 300 feet, though our amateur R/C skills kept us at a much lower altitude. mgae.com

Tech factor: A computer chip controls the plane after launch until it has the perfect combination of speed, stability and lift.

Zachary, 10, says: “It’s hard to launch the plane without crashing it, but that’s OK because the car goes really fast.”

Sneaky parent trick No. 247: Encourage your kids to play secret agent and it’ll keep them quiet for hours at a stretch. This gadget lets James Bond Jr. send messages from his keypad to the screens of his fellow agents up to 200 feet away on 10 different channels. Remember, if you’re apprehended, the agency will deny all knowledge of your mission. wildplanet.com