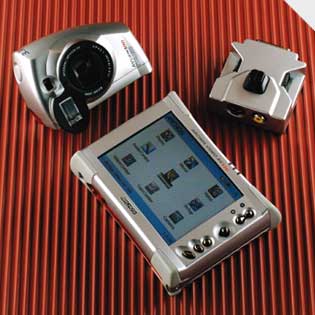 MP3 players proved the power of music-file compression.
A portable unit with massive storage and decent sound
quality? We’ll take that deal. But can MPEG-4 extend that power to digital video players? Holding the Archos AV320 ($599), we were skeptical about whether a decent viewing experience is possible on a 12.5-ounce box. Then we pressed play. It’s not perfect, but it’s enough to get us excited.

The AV320 made a great first impression when we
rolled the preloaded MPEG-4 of Ice Age. Not only did the picture look good (with occasional blockiness) on the 3.8-inch screen, it held up when piped into our 42-inch plasma. Disappointingly, however, we noticed a big drop in quality between the Ice Age file and material we recorded ourselves. Upon investigation, we found that the Ice Age file had been recorded at 640 by 304 pixels, whereas line-in recording on the Archos is limited to 304 by 224 pixels. This isn’t a complete deal-killer–the lower-resolution files look fine on Archos’s built-in screen, and the process is
simple (plug in a composite or S-video source, play the master, and hit record). Just don’t expect these files to look good on larger displays. You can get high-quality video files by ripping to a PC, encoding in MPEG-4 format, then loading them via USB. It works, but isn’t what you’d call
elegant. (Plus, higher-resolution files eat up more storage space, cutting into the advertised 40-hour recording time.)

We also tried a prototype of the AVCam 300, which attaches to the unit and turns it into a combo MPEG-4
camcorder and 3.3MP 3X-optical-zoom still camera. Again,
the quality is adequate for viewing on the AV320, but video playback on a large screen will disappoint. Also,
the indoor video and still images we shot were dark, and the still camera’s shutter is a little slow off the mark.

We expect combo audio-video jukeboxes to be breathing down the necks of MP3-only players within another year or so. There are limitations, such as size (screens are one thing you don’t want miniaturized), price and durability, but we dare you to tell us you don’t want a video panel on the back of your iPod.