No matter how far you roam, These seven new gadgets will make sure you can get back again. 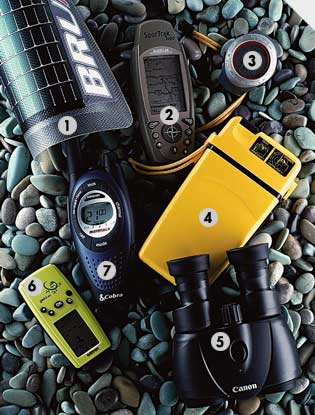 Humans love the outdoors. This is a wonderful thing. Except when our enthusiasm exceeds our abilities and we get hopelessly turned around in the middle of nowhere. Then we need other, more capable humans to help us. The National Park Service logged 4,500 rescues last year
(at a cost of $1.5 million) and many other adventurers never made it home. The lesson? Carry these navigation and communication tools and avoid becoming a statistic.

Bring it if: You need to charge your gadgets in the middle of nowhere.

Weighing in at just 17 ounces, this portable,
flexible solar panel (12 by 57 inches when open) spits out power with negligible bulk. The rollaway waterproof sheet has a maximum 14-watt output, enough to juice up small electronic devices such as cellphones, satellite phones and digital cameras. Simply lay the SolarRoll 14 in the sun and attach your depleted device via one of several provided adapter cables. Units can
be linked together to increase power, and custom lengths (with varying outputs) are available.

Bring it if: You’re always searching for a
new trail or route.

This gem won’t just tell you where you are, it’ll show you where you want to go. The only GPS device on the market with a built-in topographic map of the United States, the SporTrak also comes preloaded with maps of major roads, waterways and parks. Users have 16MB of memory they can customize with detailed street maps, marine charts and more.

Bring it if: Your treks take you to high altitudes where weather can change quickly.

This waterproof watch comes jam-packed with functions, and four-button operation makes it a cinch to navigate. In altimeter mode, it displays current altitude, highest altitude reached, accumulated altitude, and a graph of your ascent and descent in 2-second, 4-minute and 15-minute intervals. The watch also uses barometric pressure and temperature to chart weather trends, and delivers forecasts for the next 6 to 24 hours. Other features include a digital
compass, dual time zones and dual alarms.

Bring it if: You’re a Krakauer-gauge
backcountry extremist.

This slim 1-pound beacon is survival in a box. Approved by the FCC in July after an eight-year pilot study in Alaska (which yielded 400 saves), the PLB transmits your location via satellite to the Air Force and then to the nearest rescuers. Just pull the breakaway tab to switch it on, and sit tight. The beacon can guide rescuers to within 2.24 inches. Remember, blisters and beer shortages do not constitute emergencies.

Bring it if: You want see that hungry grizzly before it sees you.

As a rule, never buy powerful binoculars (more than 7x magnification) without image stabilization; they’ll magnify even the smallest vibrations. Just 4.7 inches wide and weighing about a pound, Canon’s 8 x 25 IS binoculars are the world’s smallest and lightest with built-in
stabilization. Vertical and horizontal gyros detect motion, a microcomputer calculates the amount of shake, and a tilting lens alters light refraction to instantaneously steady the image.

Bring it if: You’re a day hiker and also a
videogame junkie.

Smaller and lighter than any other waterproof GPS device on the market, the Geko’s simple
five-button interface is intuitive enough for amateurs but packs enough serious features to satisfy the hard-core hiker: electronic compass, barometric altimeter, 12-hour weather trend tool, speed and distance tracking, and the ability to transfer trip details to your PC. Plus, if you want a challenge, the unit comes with four interactive outdoor games to help hone your navigation skills.

Bring it if: Your hunter-gatherer instincts often lead you away from the group.

The PR 4000 WX is Cobra’s most powerful
two-way radio; a 3-watt, 22-channel model that the company claims will connect you to your hikemates for up to 7 miles. Note: emphasis
on “up to.” In open areas, the Cobra worked at 5 miles, but on the streets of New York City tall buildings interfered after just a few blocks. Other features include an eight-point digital compass, a 10-channel memory, adjustable output settings to conserve power, and a 10-
channel NOAA All Hazards Alert Radio.