PC Games Get Even More Graphic

Is it live, or is it your new video card? 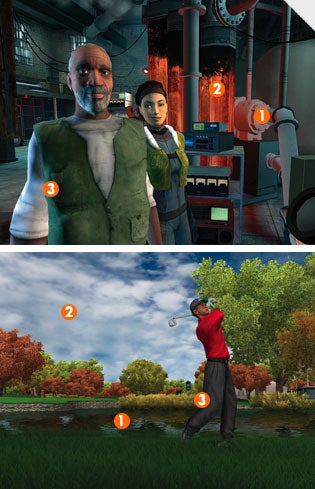 At this summer’s Electronic Entertainment Expo (E3) in Los Angeles, new video cards capable of producing more lifelike imagery left gamers twitching with anticipation. ATI displayed the powers of its new Radeon 9800 Pro card ($499) with a demonstration of Half-Life 2, a first-person shooter game, and NVIDIA went with Electronic Arts’ Tiger Woods 2004 to show off its new GeForce FX 5900 ($499). Here are some of the technologies that programmers are using to produce sweet eye candy for high-end gamers.

1. Vertex shaders give game designers greater control over the movement of polygons–the building blocks of video games–to create more convincing scenes involving complex motion, such as a view of leaves rustling and water rippling as Tiger swings (left, above).

3. Dynamic self-shadowing allows developers to make shadows on bodies that move as the figures do, furthering the illusion of depth.