Game Boy gets some competition from Sony and Tapwave. 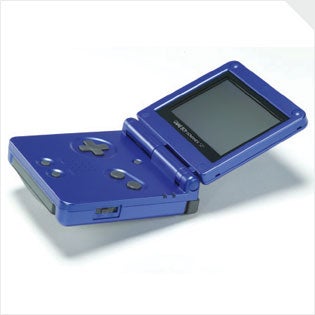 Building on the immense success of the Palm OS for PDAs, start-up Tapwave has developed an impressive PDA/game-playing hybrid that it showed at E3. The device can run the thousands of Palm-based productivity and entertainment titles on its high-res 480- by 320-pixel color screen, and it’s powered by a Motorola processor and ATI Imageon graphics chip. What makes this PDA so
suited for gaming is the inclusion of analog game controllers and triggers, a powerful 3-D graphics engine, and Bluetooth for head-to-head wirelessly linked game play between devices. Not only that, but the handheld can play music and video, and display digital photos stored on SD memory cards. The
6-ounce device will ship later this year. Expect to see it for under $300.

Sony’s also preparing what it calls the PSP, a portable device that will play games and multimedia. Though no prototype has been shown, specs of the PSP’s new storage format have been released: a 60mm optical disc (half the size of a conventional DVD) with 1.8GB storage capacity. The PSP will also incorporate a Memory Stick slot and a
widescreen, 4.5-inch LCD display, and will
support video, audio and digital photo playback. Look for it in 2004.