Meade's new 14-incher will make you a voyeur to Mars's polar ice caps. 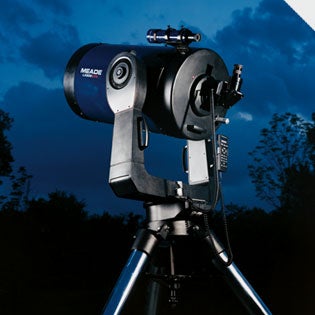 Big events call for big equipment–so on August 27, when Mars will be closer to Earth than ever before in recorded history, a new 14-inch telescope will be the big ticket for examining the Red Planet. Meade’s LX200GPS gathers 96 percent more light and has 29 percent greater resolution than a 10-incher. Peering through the new scope, you’ll be able to make out Mars’s polar ice caps, according to Charles Liu of New York’s Hayden Planet-arium. The $4,295 instrument also boasts an onboard GPS alignment system and 145,000-object database: Type in the celestial body you want to see, and the motorized device points itself. And did we mention that it’s big? The Meade’s optical housing alone is about the size of a beer keg. Of course, as Liu notes, “everybody knows that it’s not size that matters, but what you do with it.”