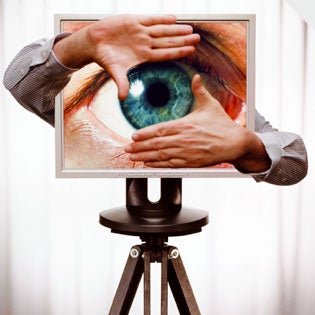 HOW HE GOT THAT SHOT
Photographer Mark Hooper created this composite photo by shooting three film and digital images, then combining the photos in Photoshop. The eye was shot with a 4MP Nikon Coolpix 4500 camera. The monitor was mounted on the tripod and then shot with a Sinar P-2 4×5 film camera on Kodak Vericolor film. Finally, a model stood behind the tripod and monitor as Hooper ran the eyeball image on the monitor, then directed the model to “square” his hands around the iris. The film shots were printed on Ektacolor paper, then scanned. All three images were imported into Photoshop as separate layers; most of the model was edited out of the model shot, creating the illusion of torso-less arms wrapped around the monitor.

1. Use uncompressed files. Photos shot and stored as JPEG files are small, but the data lost by this compression system limits your ability to improve sharpness and contrast, and make other improvements down the road. TIFF files are not compressed, but they can be huge, severely limiting the number of shots you can get on a storage card. One alternative: the RAW format, used by digital SLR cameras and some high-end point-and-shoot cameras. A RAW file is like an original film negative: all the source data is at your disposal. Downside: RAW formats vary by manufacturer and may be unreadable 20 years later if you don’t have the software. Our order of preference: RAW, TIFF, JPEG. No matter what, don’t edit and then save photos in another format like PCX or BMP, which are less likely to remain in use.

2. Pick the right media. Sure, you could store pictures on a computer hard drive (which will last three to five years on average but can be damaged) or Zip disks
(5 to 10 years, but will you still have a Zip drive by then?). The medium that makes the most sense, however, is large-capacity CD or DVD, which should last 50 to 100 years with care. Devices that can read discs are ubiquitous, so there should be
readers around in a couple of decades.

3. Spend a little more. The cheaper the disc, the more likely its data layer will separate from the plastic, or it will break or become scratched. Archive with pricier, more durable discs with protective coatings like TDK’s HardHat or Primera’s Tuff-Coat. They cost between $60 and $90 per 100. It’s worth it.

4. Watch the burn speed. While it may be tempting to burn at your CD or DVD burner’s maximum rate, choose a medium speed to minimize the risk of write errors.

5. Label Carefully. Writing on your disc with a pen can damage the data layer, and slapping on an adhesive label can cause the disc to wobble while spinning–making your data inaccessible. Use a water-based felt-tip pen, and write only on the disc’s labeling portion near its center.

6. Copy that. One tiny scratch can wipe out lots of memories. Burn an extra copy of each disc and store in a cool dry place. “Any serious digital photo buff should be burning two copies of every photo archive,” says Pieter Van Zee, senior architect for HP’s digital imaging group. “It’s your only insurance against the unknown.”

7. Migrate to new media. If your photos are stored on obsolete media like
a Jaz drive and you can’t access them, contact a company like Data Doctors, which can retrieve files from dated media. “You’ll need to migrate [to new media] if you truly want to keep data a long time,” says Jim Niswander, engineering manager for FileTek, a data management firm in Rockville, Maryland.

8. Scan your old prints. Pre-digital prints should be part of your digital archive. Use photo restoration software, like Applied Science Fiction’s Digital ICE, to remove scratches and cracks, and Digital ROC to correct color. Microtek’s ScanMaker 6800 ($399) has Digital ICE built in.