New video components that make sure your world is highly defined. 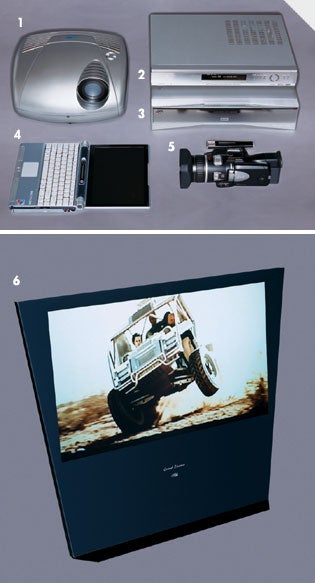 The dream of a fully high-definition existence–an admirable vision, to be sure–has long been stymied by the wait for the right equipment. Well, the right equipment is here. Arrayed on these pages is a suite of products that allow you to capture, display, record, and store visual media in eye-popping HD. There are still some holes to be filled (we’re waiting for a DVD recorder to hit our shores that can marry the clarity of HD with the convenience of discs), but if you outfit your den with products like these, your optic nerve will never again be sullied by that standard-definition fog that we’ve had to endure these many decades.

1. It’s called “home theater” for a reason, and if you want the true cinema experience, you’re going to need a serious front-projector. SIM2’s latest model, the Grand Cinema HT300 Plus ($13,995), uses Texas Instruments’ second-generation digital light processing (DLP) chips to produce higher resolutions, higher brightness and more sharpness at projections up to 300 inches diagonal. A completely sealed light engine (the elements that produce the images) ensures dust and impurities never get in the way of a
crystal-clear picture. Furthermore, the curvaceous HT300 Plus is as visually impressive as the images it generates.

2. TiVo and Replay may be the two titans of personal video recorders, but Zenith gets the nod for being first out of the gate with a high-definition PVR. Its LST-3410A ($999) has standard, high-definition and digital cable tuners and an 80GB hard drive. Zenith doesn’t have the easy interface of the aforementioned market leaders, but it does have the TV Guide electronic program guide, which has seven days of programming, one button record, and automatic tagging of favorite shows for easy browsing. It records only 8.5 hours in HD, but you can record almost 40 hours of footage in standard definition.

3. While it seems odd talking about VHS in the days
of DVD, the fact remains that until this year (which brought about the advent of high-definition Blu-
ray disc players and recorders), D-VHS was the
only format that could record HD programming. Even today, D-VHS is the only pre-recorded HD movie format
(T2 excluded), with around 75 titles available. The latest D-VHS player/recorder is JVC’s HM-DH40000 ($999), which features
a color onscreen menu and the ability to record 40 hours of
standard-definition programming on a 4-hour HD cassette.

4. On the road, the problem with most laptops for watching HD video is battery life. You’re just at the point in the new Windows Mediaâ€based HD release of Terminator 2 when Arnold is battling the T2000 and you’re scrambling for a power source. Fujitsu’s tiny Lifebook P5000 ($1,699) kept us in widescreen, 10.6-inch movies from New York to San Francisco on just one charge, thanks to its Centrino processor. The latest in Fujitsu’s P series, which launched in 2001, the 5000 continues to uphold the honors as the smallest laptop with an integrated DVD.

5. Yeah, and you once thought Super 8 was as good as it was going to get. JVC’s high-definition camcorder, the GR-HD1 ($3,499), makes home movies look more like … movies. Though not much larger than the smaller digital camcorders out there, the GR-HD1 captures more detail than you ever thought possible–you’ll start to wonder how you ever got through all those years in standard definition. But even if you find that standard def is all that you need for most events, the GR-HD1 is more than happy to oblige: It can shoot in standard as well as high-def widescreen mode, onto readily available MiniDV tapes.

6. DLP rear-projection TVs are nothing new. DLP rear-projection TVs that look like this are. Like other
second-generation DLP units, SIM2’s 55-inch
Grand Cinema RTX ($12,995) delivers crisp, bright images, but it also has the style to project them
in a stunning angular cabinet that may distract you from what-ever you’re watching. Its sleekness is enhanced by its outboard DigiOptic Image Processor, which can connect with other components up to 1,640 feet away–thanks to fiber-optic cables–with no degradation in audio or video quality.