Hot audio tech, from CD players to headsets, gets a fine tuning. 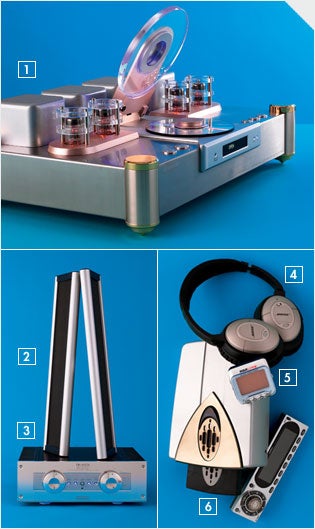 Audio components with breakthrough technologies don’t always blow away audiophiles the first time around. Often, next-gen products need to be rethought–or at least seriously tweaked–to avoid an early death. (Did you mourn the passing of the Digital Compact Cassette? Didn’t think so.) The products featured here have learned that lesson. To wit: The first Super Audio CD players were technologically advanced, but since many audiophiles (the kind of people to whom SACD was originally marketed) consider analog to be a softer sound in comparison to harsher digital tones, we are now seeing SACD players, like Shanling’s SCD-T200, that use old-style vacuum tube amplifiers. The in-car MP3 player has undergone its own evolution as well: While the original version was a nice idea, the process of downloading files into the trunk of your car was less than convenient–that is until Rockford decided to incorporate Wi-Fi. Now you can effortlessly transmit tunes stored on the computer in your home office directly to your car. On these pages we highlight a range of audio products that have gone through this natural maturation process–the kind of process that takes really good ideas and turns out even better products. Of course, the work is never done–in coming months expect to see MP3 players tripling storage capacity as well
as SACD and DVD-Audio for your car.

The SCD-T200 ($2,695) features Sony’s Super Audio CD guts, but Shanling, a rather obscure Chinese electronics company, is the first to add tube outputs to an SACD player (its previous model played only standard CDs). The result is a warmer and rounder sound. But tubes don’t handle high-end frequencies very well, and there’s no digital output.

If you’ve got the 50-inch plasma, you don’t want to ruin its lines with monster speakers. That’s why Final separated out the electronics, making the Model 100 (28.1 by 7.9 by 1.6 inches) the first truly wall-mountable electrostatic speakers. (The bulky electronics reside in an easy-to-stash box.) What’s more, a new audio transformer brings the power requirements down to 60 watts, so the Model 100 ($1,999 per pair) can be used with mid-priced receivers. Fortunately, the Model 100’s design isn’t its only selling point: The speakers sound as good as they look.

Why buy a $6,000 integrated amplifier? Because Musical Fidelity‘s Tri-Vista 300 integrated amp delivers a whopping 350 watts per channel. Other amplifiers have this kind of wallop, but none do it with Tri-Vista’s new military spec vacuum tube, the 5703. The tube, developed to work in place of solid-state electronics in the event of a nuclear detonation, delivers extremely reliable power; but even if you don’t use all that wattage, you’ll appreciate the almost tactile sound. The design is so high-tech you might think it came from a skunk works: Turn it on and the amp’s feet glow red, then orange and finally blue when the unit is ready to go.

Bose‘s first-generation noise-reducing headphones worked well, but the pack-of-Marlboros-sized external power source made you feel like you were wearing a heart monitor. Fortunately, Bose went back to the drawing board and, by using some miniaturized chips, capacitors and resistors along with some clever engineering, managed to cram the parts into the earpieces of its QuietComfort 2 ($299) headphones. Others have tried the squeeze play before, but sound quality suffered considerably. Bose pulls off the miniaturization trick without losing a note.

Until now, MP3 players came in two basic types: There are the
truly pocket-sized players, like the Samsung Yepp YP-30SH, which hold only a paltry hour or so of music–barely enough for the morning commute; and the 10 to 30GB pocket rippers, like the iPod, which store weeks of music. RCA‘s Lyra Micro Jukebox ($249) begins to close the gap. At 2.2
by 2.2 by .9 inches, it’s small like a pocket player, but its 1.5GB of storage can carry 25 hours, or 500 songs. A 1-inch magnetic
disk developed by Cornice enabled RCA to shrink the device while maintaining a low price. Now, if it only had the iPod’s
easy user interface.

In-car MP3 players seem cutting-edge–until you have to transfer music to them. Open the trunk, remove the hard drive, bring it to your PC for a sync, then put it back in the trunk. Rockford Fosgate‘s Omnifi system ($599) automatically synchronizes with your desktop PC via a Wi-Fi
antenna ($99) when your car is within 300 feet of it. One drawback: the extra head unit you have to mount somewhere on the dash.