It's like a very, very slow-to-come spring, but suburban homebuilders are waking up to the consumer appeal of environmentally friendly tech. 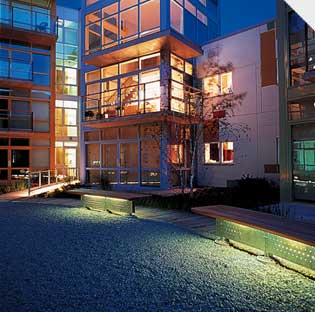 BOX ME IN
Triple-glazed, argon-filled windows trap heat by day for winter nights.

Two years ago, Atlanta-based Beazer Homes completed a prototype house near Houston that was so efficient it didn’t need a furnace: The hot-water heater kept the tight house warm enough in the relatively mild Texas winter. This, and reduced air-conditioning costs, saved enough money to offset the cost of extra-thick insulation and high-performance windows. But the project, part of the Department of Energy’s Building America demonstration program, hasn’t much changed the habits of Houston tract builders, in part because the local trade relies on labor pools and subcontractors who resist complex new systems. “It’s hard for big companies to change their way of doing things,” says Bill Zoeller, a project manager with Steven Winter Associates, the Norwalk, Connecticut, architectural consulting firm that designed the Houston home.

The U.S. home industry does show signs of gradual greening. A dedicated minority of builders is applying various environmental and electronic technologies to the American suburban tract home. (A custom-built home can be made as green as you want, of course, but such homes represent a small percentage of American houses.) Shea Homes, for example, one of the nation’s largest homebuilders, recently put photovoltaic (PV) roof panels on several San Diego homes, while Boulder, Colorado, builder McStain Neighborhoods offers PVs
to many of its buyers and uses recycled materials in every home it builds. Habitat for Humanity is building energy-efficient homes and is working with the EPA to clean up former industrial sites for affordable housing.
Improved insulation and construction techniques also help, and Zoeller counts significant gains in all this: “In some parts of the country, even average homes are now 30 percent more efficient than a few years ago.” Consumer demand for
energy-saving technology is strong.

Green construction creeps ahead, but builders have jumped to embrace home electronics. Well over half of U.S. homebuilders now offer hardwired audio, video and data networks–and not just to the well-heeled, according to Kurt Scherf, vice president of research at Parks Associates,
a market research firm in Dallas. Pulte Homes,
a Michigan-based national homebuilder, wires every home it builds. Electronics retailers like CompUSA (which is opening Digital Living Centers) and BestBuy are getting into the business
as well, for obvious reasons: It’s a good sideline, and when a network’s in place, home owners
will buy more networkable stuff.

About two dozen companies claim they let you control your home via the Internet. One of the most popular is Web-Link II, from Home Automation Inc. in New Orleans. Home Automation’s
system can talk to lighting and other controls from selected manufacturers. A competitor, called SYS, exploits Microsoft’s Universal Plug and Play format and will recognize–and theoretically control–any Plug-and-Play-compliant device. Its aim: Become to the home what Windows is to PCs. “Connecting a printer to a PC used to be iffy because each printer needed a different driver,” says Dan Quigley, an executive vice president with Lantronix, the Irvine, California, company that owns SYS. Windows is supposed to find and install printer drivers automatically, and “that’s our goal with SYS for every device in the home,” Quigley says.