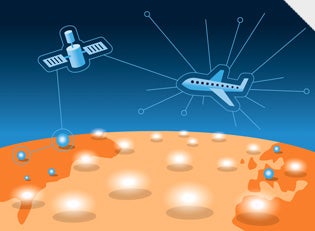 It speaks well of Lufthansa’s new inflight Internet service that the novelty wears off quickly. Sure, I’m e-mailing colleagues from 35,000 feet over the North Atlantic at 550 mph, but it feels so…office-like.

I’m testing FlyNet, Lufthansa’s branding of Connexion by Boeing, the world’s first broadband inflight Internet service, which debuted in January on a single 747 that circles between Washington Dulles and Frankfurt. Eventually, the service will expand to other routes and, by mid-2004, be offered aboard most of Lufthansa’s long-haul flights. It will remain free until then, and afterward likely cost $35 per flight. British
Airways, Japan Airlines and Scandinavian Airlines System have also signed on.

Passengers connect their laptops to the plane’s server through Ethernet cables or a planewide Wi-Fi connection, sharing bandwidth fed from three geostationary satellites. Two antennas on the plane’s fuselage send and receive the signals. During flight, the aircraft may switch satellites, but the transfer is seamless.

FlyNet is broadband, but it’s not quite as fast as ground-based hookups: There’s a slight lag as you open new Web pages, downloads take a bit longer (Boeing claims speeds of up to 3 Mbps for downloads and 128 Kbps for uploads), and my “videoconference” with New York colleagues resulted in choppy video and no sound (though Yahoo Messenger software might be partly to blame). On the other hand,
corporate intranet connections and e-mail worked just as quickly in the air.

If Boeing’s estimate that a third of passengers will use the service a third of the
flight proves true, the pipe will have to be widened, which would also enable Web telephony, true videoconferencing and online gaming. But there is a downside: The airplane is no longer the one place where no one can reach you.

Instantaneous. No different than when at home.

Slight lag compared with ground-based broadband, but the surfing is still good.

Don’t bother until Boeing jacks up the bandwidth.

Scrabble and checkers, fine; anything more will bog the system down for everybody.