Your personal Jeeves is ready. It walks and, ah, well, did we mention it walks? 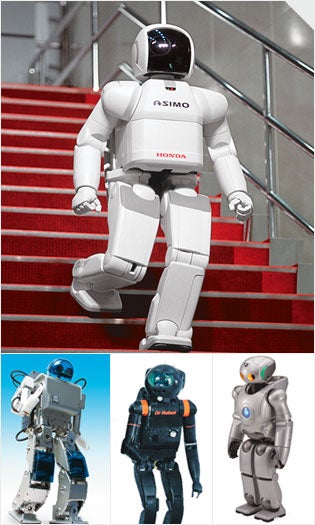 ASIMO (top) reacts to sudden impediments and can change direction on a dime. Today it´s controlled by a portable joystick, but eventually it´ll decide on its own where it wants to go . FUJITSU HOAP-1
Fujitsu´s HOAP-1 (bottom, left) is programmed via an open-source interface architecture, enabling any programmer to develop motion-control algorithms for two-legged walking. DR. ROBOT
It if falls, Dr. Robot (center) can get back up. After an hour, it automatically plugs itself into a power outlet for recharging. Interfacing in real-time with a PC, its intelligence has no limit. SONY SDR-4X
Sony´s real-time motion-control system, with four small sensors on each foot and a gyroscope on the body, enables the SDR-4X (right) to navigate just about any surface, including a moving platform. Two digital cameras provide stereo vision for dodging and weaving through obstacles. The SDR-4X will most likely be the first high-end humanoid robot you can buy.

The success of Sony’s Aibo in 1999 proved one thing: The allure of robots is so powerful that even a clunky mimic of man’s best friend can fire the imagination and sell well.

Now roboticists are up to something bigger, or at least taller: upright two-legged robots that walk almost as fluidly as humans. This long-held dream has become reality over the past few years–mostly in Japanese research labs–thanks to increasingly powerful computers, smaller digital cameras, tiny high-torque motors, and sophisticated walking and balance algorithms. You’ll be able to buy a humanoid as early as next year.

These bots are made for walking, and most do it well, but personal assistants they’re not–they can’t think independently or anticipate your next need. Honda’s Asimo, the most sophisticated of the bunch, can open doors, flip on light switches, carry heavy boxes and even clear your dinner table–provided you don’t mind a few broken dishes. You prompt it by joystick–point it at a door, and it’ll dodge obstacles and climb stairs to get there. Fujitsu’s HOAP-1 and Sony’s Aibo-based SDR-4X react to voice commands. HOAP-1’s designers want it to aid the infirm, but it won’t emerge from research labs anytime soon. The SDR-4X is meant as a pure party bot–it dances and sings, recognizes the faces of 10 people, maintains eye contact and carries on limited conversations. It’ll be available in 2004 for a cool $60,000 (the annual salary of a basic English butler).

Then there’s the voice-commanded Dr. Robot, also available next year. This is a toy. But it walks, talks, dances, evades obstacles and can even tell jokes or give investment advice. Its secret is your PC, which it uses as a gateway to the Internet via a Bluetooth link. This Web connection, along with an onboard camera, enables you to, say, check in on your kids from the road. The downside: It moves like a wobbly tot, shaky and unable to handle stairs.

The Japanese see Asimo and its ilk as Humanoids 1.0. The end game for them is intelligent autonomy, a robotic crew to serve the elderly, nanny children and otherwise make the world a happier place. American roboticists, on the other hand, mostly eschew humanoid designs in favor of single-service gizmos like vacuum cleaners and lawnmowers. Joe Engelberger, the father of industrial robotics, says that’s because “robots don’t need minds of their own.”

The key, Engelberger believes, is giving them the strength, dexterity, environmental awareness and communication to carry out human directives in a human environment. He concedes that human-like walking is a great engineering accomplishment but questions the practical value: “Wheels are fine for most applications.”