The showâ€™s sagging with the PC industry, but innovation lives. Here are our picks for best in show. 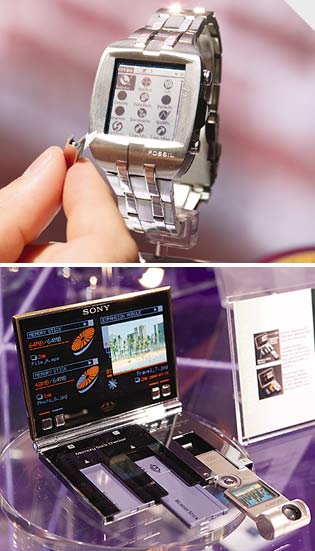 A poor economy and a stagnant industry conspired to make last November´s Comdex, the largest U.S.-based computer trade show, a shadow of its former self. But even in this repressive environment, and with Las Vegas as the backdrop, sparks of innovation flew. They just weren´t sparks of computer innovation, at least not in the traditional sense. Here are our picks for best in show.

ACCESSORIES FOR THE OBSESSIVE FAN:

Valence Technology was drumming up business for its Saphion lithium-ion battery technology, which appears in N-Charge, a $350 battery that charges or powers multiple devices simultaneously (including a laptop for up to an impressive 10 hours).

FranklinCovey, riding the coattails of Fujitsu, Toshiba and Acer, introduced the TabletPlanner, a Tablet PC version of its paper-based schedule, task and organizer products.

A PAIR TO REMEMBER:

Sony previewed its 256MB Memory Stick Pro, which will not be compatible with all current products. Not to worry, because its tentatively titled Memory Stick Select (left, bottom) will work with existing products; it´s a Memory Stick separated into two 128MB sections by a manual switch.

Samsung´s SGH-V205 is not the first cellphone with an integrated digital camera, but it´s a wonder of minimalist design with a sleek
1.8-inch LCD.

YOUR WORK ON THE WEB:

National Semiconductor and Citrix unveiled the prototype Geode Extended Office, a tiny wireless touchpad that runs your work applications via the Internet.

The $2,295 General Dynamics´ TalkSecure Wireless phone, with 128-bit encryption, will ensure no one´s listening in.

Via´s Hi-Fi PC can masquerade as anything from a stereo component to a gas tank.