It's coming this year, as terrestrial broadcasters embrace the potential of digital signals. 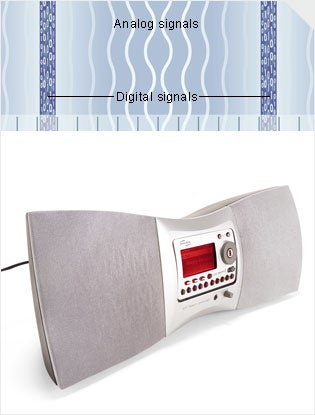 Illustration by Garry Marshall; Photograph by John B. Carnett

DIGITAL GETS A FREE RIDE (top): Radio broadcasters can use the edges of the spectrum they use for their analog signal to send a digital one too. SAT RADIO ANYWHERE: For 10 bucks a month, your radio service should be able to go everywhere you do. XM Radio’s SkyFi fits into a car mount, home stereo or this boom box.

The move to digital radio began in late 2001 with the launch of XM Radio’s satellite service, and a half-million people now pay to hear XM and Sirius’ stations. But 2003 marks the beginning of digital radio for the masses–your favorite local stations delivered to your car or home stereo digitally, and for free.

iBiquity Digital HD Radio technology, backed by 15 of the nation’s top radio broadcasters, including ABC, Clear Channel and Viacom, piggybacks a digital signal on a conventional analog broadcast. The major benefits: FM-quality AM, and CD-quality FM. Broadcasters can also attach data, such as artist and song title. Eventually receivers will have onboard memory, enabling them to, say, store real-time weather and traffic that you can access 24/7. The service, of course, will be brought to you by Jiffy Lube, as advertising will offset broadcasters’ cost of upgrading. Once you lose the digital signal, analog takes over for a smooth fadeout.

To receive the digital broadcasts, you’ll need an HD Radio receiver, which will cost you an extra $100 in the near term. But like satellite-ready radios, they’re expected to become standard equipment in new cars within a few years.