From opaque to clear in seconds, instead of minutes. 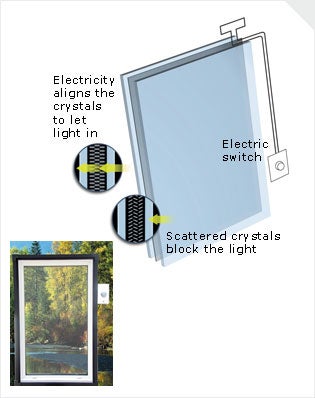 We’ve been burned before, but here goes: New York Research Frontiers’ SPD electrochromic glass has a real shot at commercialization. Its benefit over previous attempts: Apply a voltage, and the glass goes from opaque to clear in seconds, instead of minutes. The key is a film coated with microscopic light-absorbing crystals. These crystals naturally shade the glass, but align to let light through when subjected to a voltage. ThermoView, of Louisville, has licensed SPD for home windows, while Fort Lauderdale-based InspecTech hopes to use it in aircraft cabin windows. SPD adds $100 to each square foot of glass.