Madden 2003 and the Ill-Timed Punt

We try, but fail, to beat Marshall Faulk at his own game. 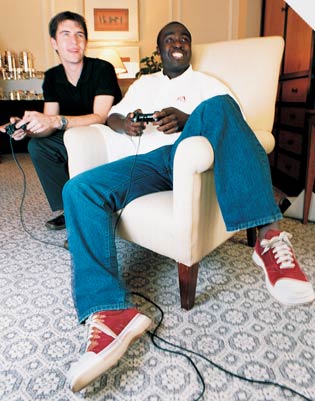 MARSHALL’S WEAPON Faulk’s running attack had us on the defensive.

We didn’t lose to Marshall Faulk. We were losing, sure, but the final gun never sounded. Our man, Assistant Editor Michael Moyer, called a punt instead of a two-point conversion after a TD with 10 seconds left in the 4th. The software, an alpha version of EA Sports’ ultrarealistic Madden 2003 NFL Football, couldn’t make heads or tails of the Ray Rhodes-like call, so it locked up. Game over. Faulk wins 21-16, but with an asterisk.

Faulk is the cover athlete for this year’s iteration of Madden ($50), unquestionably the best football videogame ever. Available for all the major game platforms and the PC, the new version features improved graphics (300 player faces have been animated) and new game mechanics, including spin and stiff-arm moves (at which Faulk is extremely adept), gang tackling, and sidearm passing. You can also customize receiver routes, and the PlayStation 2 version supports online gaming.

The most tangible improvements, however, are the formations. Along with nickel and dime, there’s a “quarter” defense that employs six defensive backs to guard against the run-and-shoot. Also, on passing plays, you no longer have to press a button to call up receivers-you just snap it and pass it.

What Madden 2003 won’t do, we learned, is handicap bad coaching. As we said, ultrarealistic.

WHAT ELSE IS NEW?
Our favorite sports games get better for 2003. Here’s how.