Put Up Your Digital Dukes!

Sony and Apple make computers they claim will bring order to the chaotic and confusing digital desktop. We put the two systems to a head-to-head test.

The idea is simple: a home computer that acts as a kind of dispatcher, translator, and organizer for all your digital devices. A computer that can download and edit data from PDAs, digital cameras, the Web, MP3 players, DVDs, and CDs without the nightmarish struggles over compatibility that have made many users want to hang themselves from the nearest beam with a USB cable. Sony, which manufactures gadgets for almost every digital need, has been preaching this “convergence” for years, hoping consumers will buy Sony, Sony, and more Sony. Apple, which makes a limited number of products (computers, and the iPod MP3 player), launched the new iMac earlier this year by emphasizing a software package that turns its cartoonish-looking desktop into the ultimate digital “hub.” Ladies and gentlemen: In one corner, the Vaio MX computer, operating on Windows XP, costing a hefty $3,400. In the other, the iMac, at a slimmed-down $1,800. If convergence is the promise, which one gets us to the promised land?

THE HUBS WE COMPARED
(Both systems include a built-in 56K modem and Ethernet support.)

Before we get to the nitty-gritty, consider the big picture. The Zen of Apple dictates that it shall provide you with one beautiful program for a task, and that shall suffice. Sometimes this works brilliantly: The iDVD software for burning home movies to recordable DVD disks is, as Steve Jobs would say, insanely great. The heavily touted iPhoto digital imaging software, on the other hand, organizes pictures nicely but allows only simple touching-up. To get more, you buy more software.

The Sony hub philosophy is to load the MX up with multiple solutions and let you find the one that matches your needs and abilities. Along with the basic Windows XP photo software, for example, Sony provides five additional utilities. These include Adobe Photoshop Elements, a streamlined but still-powerful version of Photoshop. In a perfect world, you’d have one great program that can do it all. In the meantime, there’s the Apple one-song approach versus the more costly Sony jukebox.

With the iMac, you create something cool-a DVD, say-and then carry it somewhere else to enjoy. Sony’s broader view of the digital hub includes serious multimedia playback. The Vaio system includes hefty Sony speakers that perform beautifully, as well as a built-in TV tuner and FM radio tuner, which make it possible to record programs for later playback. The iMac’s wee speakers can’t compare: They vibrate and badly distort any bass-heavy piece of music.

Unpacking the Box
I open the iMac and have to laugh. With its cute little round speakers and flat-panel screen attached by flexible arm to a bulbous base, the computer seems to be smiling at me: those cheeky monkeys at Apple! The playful feeling persists as I skim the wordless installation document, then plunk the iMac down on the tabletop. Insert the keyboard, mouse, and phone cables, plug in the power cord, press the On switch-that’s it, we’re running. A Zen-like simplicity to be sure, until I get to the initial software setup routine, and then Big Brother shows up. Turns out that if I don’t enter all my personal information into Apple’s online registration forms, I’m not going anywhere. Yes, there’s a privacy statement, but I don’t think I should have to pony up personal info to use a product I’ve paid for.

On to the Vaio: two boxes, not one (the LCD monitor is a separate purchase), and a cornucopia of cables, wires, manuals, even a remote control with buttons for TV, FM, and DVD. As I work my way through the Getting Started instructions, plugging cables hither and yon, I come to the speaker install: traditional speaker wires with red and black spring clips instead of the usual miniplug jack. And there’s a separate LCD panel on the front of the computer to display media playback information. I think we’re going to have some fun with this rig-a thought that helps get me through a 45-minute setup.

When it comes time to connect digital gear to the hub, both systems do well. Often the devices simply plug right into the computers. The Nikon and Sony digital cameras, for example, are ready to go when I connect the USB cable.

Convergence requires simple ways to get data in and out of the hub. Both systems handle USB and FireWire (also called iLink) connectivity equally well, with one caveat: You will find some devices that don’t offer driver support for both platforms, and it’s usually going to be the iMac that gets left out, so shop carefully. The Vaio system, with its built-in MiniDisc and Memory Stick slots, rewards Sonyphiles. This can be a huge convenience, but means extra expense for those who prefer, for example, CompactFlash cards over Memory Sticks for data transport.

Finally, know that neither computer is complete. You can burn CD copies, but neither has a second CD-ROM drive that enables you to copy disk-to-disk-you have to tediously swap the source disk and the blank back and forth, or transfer the entire disk to your hard drive first and then burn a copy.

These are powerful machines with hundreds of features, so how do I know what I’ve got to play with? Here, alas, we come to a key failing of both systems: communicating. Not communicating over wires with other gear, but communicating with the poor dope who bought the box and can’t figure out how to use it. Apple’s User’s Guide booklet gives newcomers a few clues about how the Mac operating system works (it’s the new OS X system), but beyond that, good luck. Vital information is buried in help files, and I do mean buried. How do you search for information about a feature you don’t know exists? Hunting around the hard drive reveals the AOL installer, a game called Otto Matic, the AppleWorks office suite, and more-even the full version of Quicken Deluxe 2002. Should discovering software I’ve paid for require an Easter egg hunt?

Sony tries harder with the printed info (at least there’s a list of installed software), but there are still gaping holes. The most frustrating experience comes when I try to create a DVD disk on the Vaio. I edit two video movies, using two programs, and save the results as digital video (AVI format) files. The DVD burning program rejects both. I then figure the files are in the wrong format. But the help system for the Adobe Premiere video editing software is no help. Ditto the Premiere manual. I try the Microsoft Windows Movie Maker help file: nada. Sony’s two manuals frustrate me. Sony’s Internet support-forget about it. Finally, on the phone, I learn that, with the settings just right, the process works like a charm.

Despite its reputation, I don’t find the Mac OS easier to use than Windows XP. One OS X feature I do love is the Dock, an on-screen panel that keeps your favorite programs and documents just a mouse-click away. Windows XP is much more reliable, and somewhat easier to use, than its predecessors.

The Bottom Line
Both systems deliver on the digital hub claim. If price were no object, which would I rather have in my home? The Sony, because it’s a better-rounded system for the digital content that matters to me. But if I did buy an MX, you can be sure that my wife would never see the credit card receipt: We’re talking about a $1,600 gap here! The new iMac delivers an elegant design and first-rate computing performance at a middle-class price tag (the stripped-down model, sans DVD-recording, goes for $1,299). Despite a Sony exec’s comment that the Vaio is “the ultimate dorm room computer,” theirs is, by contrast, a luxury product. Yet I love the Vaio’s built-in TV tuner and FM radio, and the stereo-system-quality sound makes me happy. Of course, I work out of a home office and don’t have to worry about my old Genesis CDs sending the guy in the next cubicle into a homicidal rage. Money aside, the rub about hubs is that much depends on how you plan to use all that connectivity once you’ve bought it. The good news is that these hubs live up to most of the claims.

Ripping a CD to Your MP3 Library 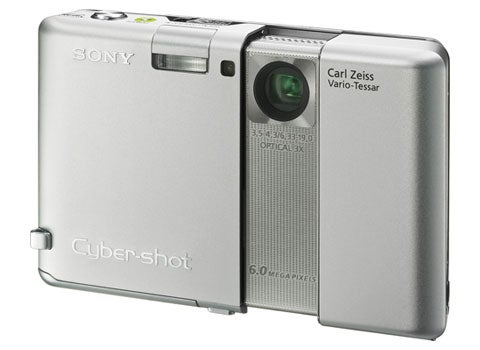 Shoot some pictures and turn on the camera’s Wi-Fi wireless function, and the DSC-G1 magically appears as a new server that I can click to view photos on the TV screen.

First the good news: A few pieces of gear worked with no tinkering or hoop-jumping… Using the BDP-94HD’s remote and the TV screen, I could easily search for the files I wanted, selecting clear onscreen icons for file folders and then individual files (or music playlists, or photo slideshows) using the remote’s navigation buttons. 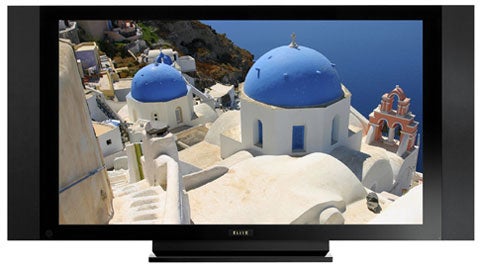 Now the glitchesâ€ While fetching photos from the Buffalo drive, it could display thumbnails of all the pictures in one huge array. But it didn´t let me drill down into file folders to choose groups of pictures on the drive, even though its brand-mate Blu-ray player handled the same task with aplomb. 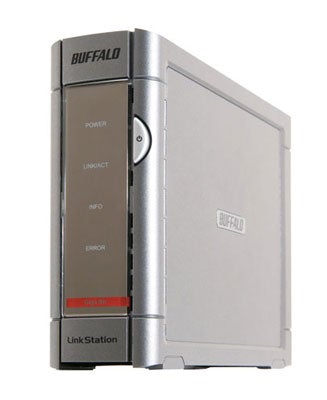 For starters, I tried to install the 250-gigabyte Buffalo LinkStation Live ($230), a network-attached hard drive that’s DLNA certified for serving music, photo and video files. But the computer-based setup software stalled repeatedly. I tried everything from swapping cables and disabling firewalls to changing computers (from Vista to an XP machine). Finally, on the Web site, I discovered the answer: I had to download completely new installation software. That did the trick. After loading some tasty media files on the LinkStation and accessing them successfully from my PC (no DLNA magic required), I began festooning the network with DLNA-certified clients–a plasma TV here, a Blu-ray player there, my PlayStation 3 game console, an A/V receiver and a digital camera.

The Denon had intermittent trouble accessing my network, found or failed to find the server files based on the phase of the moon (so it seemed), and presented a garbled menu when trying to access Internet radio stations. 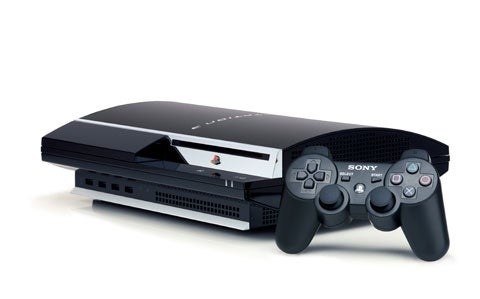 At first glance, the console seemed to work beautifully. Sony’s Media Bar navigation system strings categories (games, music, movies, etc.) horizontally across the screen and selections within each category on vertical branches, making it easy to find files. Then I added more photos and music to the Buffalo drive–and the PS3 ignored them. If I deleted some files, the PS3 still showed them in the onscreen list. I finally found a workaround, but it’s ugly. I had to turn off the LinkStation, let the PS3 fail to find it, and then turn it back on and let the console rediscover and re-catalog the contents-every time I added or removed files.