Gadgets in Hand, We Track the Perps

On the job with Jesse June, high-tech private eye. Clock cams, bionic ears, and video periscopes are all in a day's work. 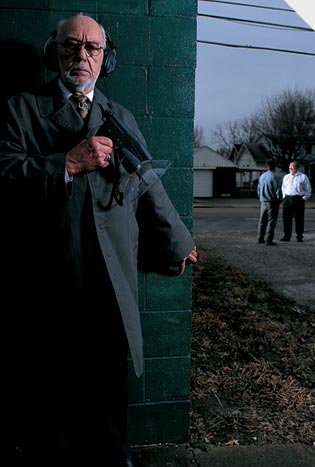 Hearing aid: Jesse June’s bionic ear can pick up whispers from a block away.

8:10 a.m. I arrive at the Evansville, Indiana, offices of Hi-Tech Investigative (www.hitechinvestigative.com), and find owner and local sleuth Jesse June sitting at his desk-minus the trench coat and top hat, but still smoking the mandatory Lucky Strike (OK, it was a Marlboro Light).

At 70 years old, June doesn’t look like he’s at the forefront of spy technology. But then, he’s made his living not looking the part: Prior to opening his own investigation firm two decades ago, he spent 22 years spying for the U.S. government in the former Soviet Union.

9:15 a.m. June explains to me exactly what he does: “I mix high technology and grunt work to get the job done.” The Internet seems to be key-at least a dozen computers fill his offices, giving June immediate access to criminal records, credit information, asset identification, employment screening, and other databases, including something he calls “your FBI file.” He doesn’t elaborate.

11:05 a.m. June breaks out the gadgets. Among his favorites: a pinhole camera that’s mounted inside a clock and a bionic ear that can pick up whispers from a block away. Next, we head
outside to view his prized possession: a video-camera-laden white van equipped with a periscope that peeks up through the roof. The vehicle doesn’t look like much, but that’s exactly the point. It allows June to capture video and still photos without stepping outside.

In fact, the van’s coming in quite handy with one of his current cases. A husband is stealing from his in-law’s jewelry store and using the windfall to pamper his mistress and satiate his drug habit. June says he’s already captured enough visual evidence to run the guy out of town forever.

1:20 p.m. We’re going operational on a divorce case. June fires up Computer Cop, software that collects evidence from seized suspects’ computers. It’s the same program the FBI uses to hunt child pornographers and racketeers. Computer Cop scours the hard drive and cache memory, searching e-mail, Web-surfing logs, even hidden and deleted files. It also checks the machine for any of 7,500 words that might suggest criminal behavior. “You can do what you want on your computer,” June says seriously, “but if you’re a crime suspect, technology will find what you’re hiding.

“These days, 50 strokes on the keyboard,” he continues, “beats 50 blocks on the streets.”