Cameras and videophones break the ice. 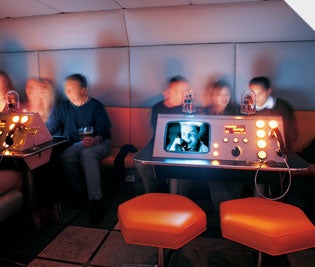 So ends my first conversation at the recently opened Remote Lounge in New York’s East Village, a bar experience unlike any other (except for my crash and burn). The girl who brushes me off is cute, and after lengthy internal debate I’d made my virtual move–bringing her up on my video screen and calling her on the inter-table phone.

Sixty video cameras cover every nook and cranny of this place, sending footage to the 100 monitors and projection screens throughout. Each bar-goer sits on a stool at a control pod, a cross between Star Trek’s helm and an arcade game. On top is a tiny video camera, one for every two seats. With a joystick, you can control any camera in the room–and anyone can aim yours at you.

You can also take pictures with them, which are immediately uploaded for later download. On the night I was there, the trigger-happy crowd took 2,013 guilt-free, voyeuristic shots. It’s a strange trade-off: You give me your privacy, and I give you mine. The sign at the door spells it out: “You agree that you have no expectation of privacy for any acts or statements made on these premises.”

Later in the evening, another girl calls me and we talk a little. But when I try to get her on my monitor, I lose the audio. She doesn’t call again. When a similar thing happens a second time, I give up and start chatting with
the technology-challenged young woman sitting beside me.

It’s strange, but this place does make meeting people easier. “Do you know how this works?” is a great icebreaker–even, perhaps especially, if the person is sitting right next to you.