PopSci.com's second annual inside peek at the enormous trade show that spotlights the brightest and best technology innovations we can expect to see in the months ahead. 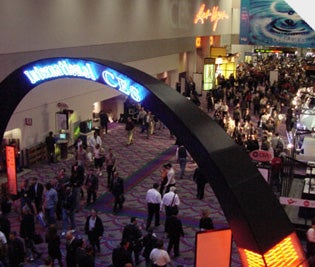 PopSci.com’s second annual inside peek at the enormous trade show that spotlights the brightest and best technology innovations we can expect to see in the months ahead

Well here we are again. Back in Las Vegas for the 2002 Consumer Electronics Show. This is PopSci.com’s second annual inside peek at the enormous trade show that spotlights the brightest and best technology innovations we can expect to see in the months ahead. Once again I ‘ll give you the viewpoint of the most average of Joes (yours truly).

I don’t understand all of the science and technology that makes these things quicker, smaller, and easier to use, but I certainly appreciate the amazing changes that these innovations have made in our lives. My role is to tell you about the hottest new products that will hit the market his year, the cool gadgets that you must have to impress your friends and neighbors.

A lot of the stuff I told you about last year has hit the streets to critical and commercial success. Some products are still trying to find their way. One new technology that was hard to miss at last year’s show was satellite radio. The two competitors in the field, Sirius and XM, spent lots of marketing bucks to spread awareness of their national radio programming through live daily shows packed with celebrities and musical guests. But both launches were delayed and the companies have had trouble convincing consumers to pay for radio reception. The multimedia handhelds (PDAs/cellphones/MP3 players, and so on) that were in abundance last year have still not taken the world by storm the way PDAs themselves did a few years back. But the word on the street is that with prices coming down and improvements in design and ease of use, these handhelds are poised to make an enormous impact in the months ahead.

Last year’s biggest buzz surrounded Bill Gates’ introduction of Microsoft’s Xbox. The graphics and game-play demos were outstanding. It was definitely the gadget I wanted most when I left last year’s show. And now a year later, we’ve had one in the office for about two months, and it’s everything I had been expecting. It’s almost a little too good, in fact. My fellow editors and I have been tying up the PopSci testing room for the better part of six weeks “evaluating” the software (in other words, playing Madden 2002 and Gotham City Racing until our eyeballs bleed). For a review and head-to-head comparison between Xbox, GameCube, and the PS2, check out our February issue.

This year’s show kicked off tonight with a keynote address by Microsoft leader Gates. The world has changes enormously in the past 12 months. But not Mr. Gates’ presentation. Except for a few update slides of products Microsoft released this year, his speech was way too similar to last year’s. We’re on the cusp of the digital decade, Microsoft software will help connect everything in your home, tablet PC monitors are ready for their breakthrough, blah, blah, blah. I know this wasn’t the perfect venue for it, but since he was talking about how easy and safe Microsoft software is going to make our lives, he should have at least mentioned the problems the company is having with the vulnerability of the new Windows XP software to hackers, as well as consumer complaints about some of the Xbox consoles. That said, I’d still sit in a hot, crowded auditorium anytime to hear the guy talk. Some say I have a soft spot for bazillionaires, but I’m just still impressed by the performance of Microsoft in what can be called at best a troubled year. It sold 17 million copies of the new XP software (a 300 percent improvement over sales of Windows 98.) It entered the crowded videogame console market by selling more units than any console in history. It sold 1.5 million Xboxes and almost 5 million Xbox games. And it also has more than 150 titles slated for release this year. And to top it all off, Bill did an eerily impressive Harry Potter imitation in a pre-taped video segment.

And as I sit here the night before the show in my hotel room, I can only wonder about what new thing I’ll be dreaming about evaluating as I’m flying back to New York. Talk to you tomorrow.