The soul of a new guitar is infrared. 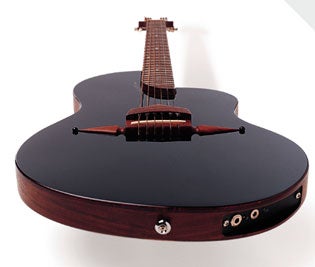 by Photo by: Dave Teel

Johnny B. even better: Lightwave Systems hopes its new optical pickup will revolutionize the electric guitar.

From the days of Les Paul and Charlie Christian to those of Eric Clapton and Metallica, the electric guitar has remained basically the same. A “pickup” consisting of a magnet surrounded by a coil of wire is placed close to a metal string. The string’s vibration changes the magnetic field, which transmits an electric signal through the coil. This signal is then broadcast through an amplifier.

But California’s Lightwave Systems is about to introduce something new: an optical system that uses infrared light to cast a shadow of the string onto a series of photodetectors. As the string vibrates, the shadow does too, modulating a current and producing a signal much like a magnetic pickup–only a lot better.

A magnet’s pull on a standard pickup not only senses a string’s vibration but interferes with it as well, says Lightwave founder Chris Willcox. Magnetic pickups can also produce an annoying hum; optical ones do not.

Lightwave released its first optical pickup in January 2000 for electric bass. It received rave reviews from jazz virtuoso Stanley Clarke and from Tim Landers, who has played with Tracy Chapman and Tori Amos. “The Lightwave picks up more nuances,” says Landers. “It makes you create in a different way.”

Whether the pickup will appeal to the much larger market of guitar players remains to be seen. The first Lightwave-equipped guitar is slated for release later this month.