First there was the Wii, then Microsoft’s full-body-capturing Project Natal grabbed out imaginations. And now — and not to be... 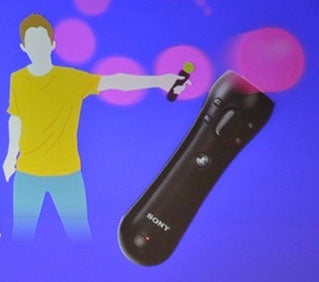 First there was the Wii, then Microsoft’s full-body-capturing Project Natal grabbed out imaginations. And now — and not to be left out — Sony’s finalized plans to roll out their own motion-capture system. Sony today at the Tokyo Game Show confirmed their Motion Controller for the PS3 will be available in the spring of 2010 with a baker’s dozen of supported games.

The remote-like device, tentatively named just “Motion Controller,” works in conjunction with the PlayStation Eye to capture movement, voices, and player images. The controller uses two motion sensors, a gyroscope, and an accelerometer — much like the Wii-mote. That orb up top serves a dual function as a motion tracker and an additional source of in-game visual cues to the player. It has the same rumble pack as DualShock 3 controllers and runs on rechargeable lithium ion batteries.

There’s no pricing information available yet.

Civilized Games caught Sony’s tech demo at the E3 gaming conference a few months back, if you wanna check it out in action.