Well, the prophets were right: No App-let (Ta-pple, Ta-cintosh, whatever) today. The real news: Steve’s back, the iPod nano is... 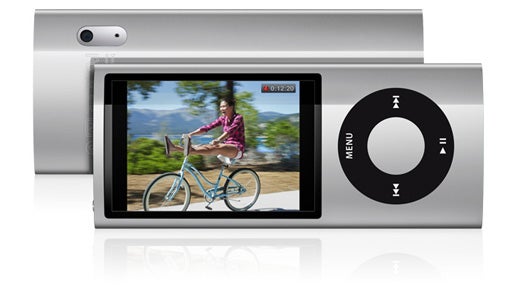 Well, the prophets were right: No App-let (Ta-pple, Ta-cintosh, whatever) today. The real news: Steve’s back, the iPod nano is trying to kill Pure Digital’s Flip pocket camcorder, and iTunes lets you copy files within your home network.

Let’s start at the end of today’s “It’s Only Rock ‘n’ Roll” event, with the now-infamous “One more thing…” All new iPod nanos will now have 2.2-inch screens and a camera on the back to record 640-by-480 video. (We pretty much saw this one coming, but thought iPod touch would join the camera party, too.) The new nanos will also have FM tuners and pedometers. They’re available today for $150 (8GB) and $180 (16GB).

Not to be left out of the party entirely, the iPod touch got a little attention in the form of a new CPU. The new touch lineup will have the same guts as the iPhone 3GS, which means it will run faster and make gameplay more dynamic. The 8GB model will cost $200; 32GB, $300; and 64GB $400.

Oh, the iPod classic wants to play, too? Okay, you get a price drop to $250 and a storage upgrade to 160GB. Pretty much the same story for the sad li’l shuffle, except he gets a special stainless steel limited edition on top of a new prices: $59 for 2GB and $79 for 4GB.

iTunes 9 also has plenty to offer. First up: Home Sharing, which allows you to copy songs, TV shows, and other content (including apps) between up to five computers in your house with a simple drag-n-drop. They’ve also added iTunes LPs, which give you full liner notes, photos, and other bonus materials when you buy an album. The new iTunes Extras does the same for movie purchases, tacking on DVD bonus features with purchase.

iPhone OS 3.1 is also out today, and includes Genius recommendations in the App Store and a 30,000-entry ringtone store.