Fresh From Skunkworks, Hints of Microsoft’s Own Secret Tablet

While drool over Apple’s tablet is starting to accumulate in unsightly lakes and ponds across the web, little old Microsoft... 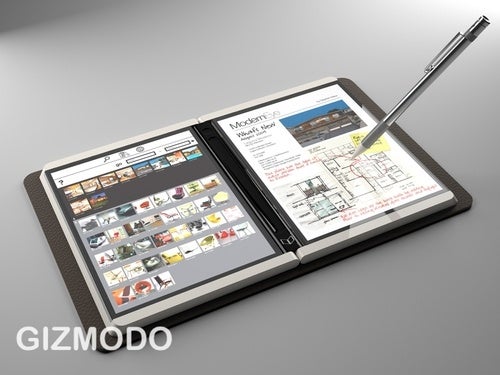 While drool over Apple’s tablet is starting to accumulate in unsightly lakes and ponds across the web, little old Microsoft has been hard at work on Courier–an as-yet conceptual tablet of its own that our friends at Gizmodo unearthed last night. It’s a totally different approach from what most are expecting from Apple, and in this concept video, it certainly looks pretty hot.

Courier eschews the tablet form factor for what’s really more of a notebook–dual mutlitouch screens open like a book, providing two distinct workspaces. Input is done via a stylus, which is something no one is expecting Apple to do. Here, drawings with the stylus functions can be natural handwriting and doodles, as well as character recognition in the browser for typing URLs. The dual-screen metaphor means apps (address book, browser, maps, camera) can live on the left screen and can be used with the journal screen on the right to capture clippings, even from flash movies.

Gizmodo says that despite the dreaminess of these conceptual renderings, Courier is in fact real and in the “late prototype” stage. It’s being developed by Microsoft’s all-star engineers in a musty cave somewhere in Redmond, apparently headed by J Allard, Microsoft’s “Chief Experience Officer” and the Xbox’s chief designer.

I like the conceit here. Notebooks, to me, have always been the most appealing receptacle for thoughts and creativity, but they have the unfortunate distinction of being made of paper. Since I started using computers, I’ve always kept folders with clippings from the web–saved images, bits of text, PDFs of whole webpages even, which for the most part stay right there in their folders. A tablet conceit like this lets those clippings become part of your daily work, which is a pretty exciting thought. In the end, it all comes down to whether the input method of multitouch + stylus can smoothly replicate pen on paper. Many have tried and failed, but I’m glad Microsoft appears to be taking another shot.