The legendary inventor and guitar icon is dead at 94 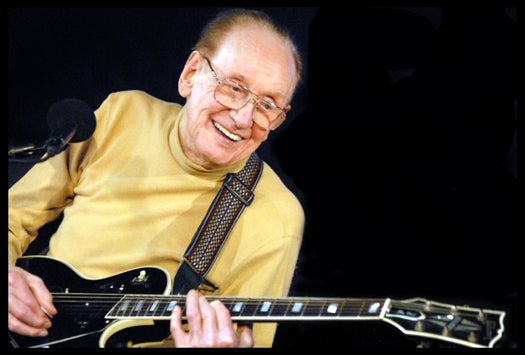 Les Paul, the inventor and musician who built the first solid body electric guitar and recorded the first multi-track song, died on Thursday due to complications from pneumonia. Popular music’s Thomas Edison, Les Paul’s technological innovations drastically altered the face of music and culture. He was 94.

According to legend, Paul created his first electrically amplified guitar when he was only a teenager, by inserting a record player pick up into the back of an acoustic guitar. In either 1940 or 1941, Paul created what is generally considered to be the first solid body electric guitar. Music was never the same.

Unlike the many custom guitars Paul would create for himself later in life, his first electric guitar was nothing more than some pickups nailed to a wooden board. The composite was so unsightly that he nicknamed it “the log”.

While other instruments before Paul’s guitar had generated sounds purely through electrical signals, none of them caught on as quickly or as widely. The instrument became synonymous with rock and roll, and the guitar design that bears his name became the signature instrument of musicians like Jimmy Page and Slash.

Additionally, Paul also invented multi-track recording. Possibly more revolutionary than his solid body electric guitar, multi-track recording became the standard in both music and film. While Paul first succeeding in recording multiple tracks on a shellac disk, it was a single track reel to reel given to him by Bing Crosby in 1948 that really set off Paul’s creativity. He began piling on additional recording elements as soon as he got the gift, and within a day created the eight track magnetic tape system that still serves as the most common recording machine.

Paul also invented numerous guitar effect devices, new kinds of pick ups, and an array of new transducers. Taken together, his invention of new sound effect techniques and multi-track recording led people to re-imagine music as digital, not acoustic, laying the groundwork for dub, hip-hop, electronica, disco and a range of other modern musical genres that rely more on electronic devices than acoustic instruments.

An inventor to the end, Paul was even rumored to be working on a new device at the time of his death. But Paul was also a musician, playing a weekly gig for most of his life, even after arthritis and car accidents severely damaged his hands.

Paul’s greatest accomplishment may not be his many inventions or his millions of records sold, but the fact that he managed to live in both of those worlds. In an age when musicians bemoan technology’s influence on music, and scientists make music primarily as a joke, Les Paul served as an example that not only do science and music go together, but that they are both made stronger by the association.