How About Cash for Tech Clunkers?

This week, Uncle Sam’s gas-guzzler gold rush was officially put to sleep. With some 800,000 fuel-efficient cars sold in the... 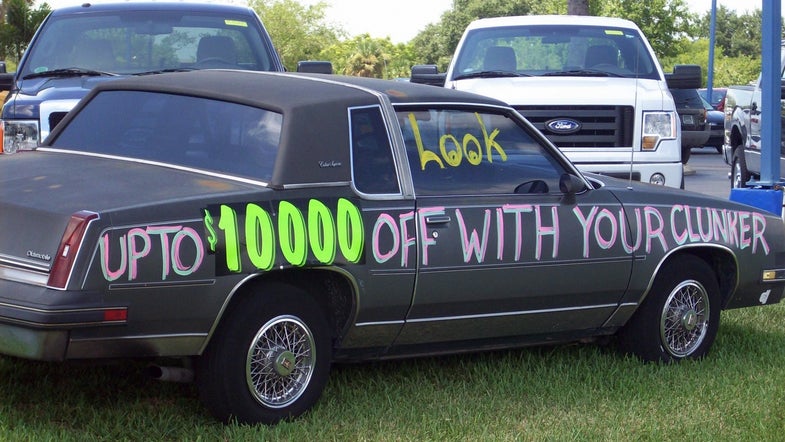 This week, Uncle Sam’s gas-guzzler gold rush was officially put to sleep. With some 800,000 fuel-efficient cars sold in the months of July and August, you’d be hard pressed not to call it a success. I don’t own a car myself, and so the hysteria surrounding Cash for Clunkers was lost on me. But it did get me thinking about all the clunkers I do have in my life: my aging, decrepit tech.

I’ve got an old 12-inch Powerbook that can barely play online video and is incapable of running Snow Leopard. I’ve got an almost two-year old LG Voyager phone that only half works. I’ve got a functioning digital camera going unused, a dead iPod, and drawers full of old chargers and cables. Why can’t I score some government cheese for this old crap?

If a new Ford Taurus costs $25K, the government was offering up to roughly 18 percent of that cost in exchange for an old beater. Now, imagine this model applied to personal electronics. If I could trade in my old gear for 18 percent the cost of a new computer, smartphone or camera, I’d do it in a second. Not only would I be recycling my old stuff, but I’d be purchasing a more environmentally sound product while also injecting money into the economy. What’s more, manufacturers would be incentivized to be more Earth-conscious with everything they sell and, eventually, all of our electronics would be green.

Such a program seems like a no-brainer. So, why doesn’t it exist? Well, for one, let’s not confuse the Car Allowance Rebate System with environmentalism or even a generous helping hand to the downtrodden American consumer. Cash for Clunkers was aimed squarely at rescuing Big Auto and safeguarding the government’s investment in GM. But that’s only half of it. The real roadblock to such a cash grab for green gadgets is the way in which we currently grade electronics and appliances for eco-compatibility: the Energy Star program.

When it comes to cars, we can more or less use miles per gallon as a marker for greenness. A lower MPG rate means lower emissions, and is therefore better for the Earth. The lower the MPG the greener a car is. More importantly: the lower the MPG the less you’re spending at the pump.

Energy Star is much less cut-and-dried. First of all, the joint program between the Department of Energy and the Environmental Protection Agency is a voluntary one. Secondly, it’s not a graded scale — something is either Energy Star-compliant or it isn’t. Third, it’s purposefully not overly demanding. According to Karen Schneider of the EPA, the program’s bar is set exactly at the point where energy efficiency meets affordability. An Energy Star refrigerator is going to be more expensive than its non-Energy Star counterpart, but Energy Star wants you to be able to recoup that extra cost in five years with money saved on utility bills. “We don’t want to make a clothes washer so green that no one can afford to buy it,” Schneider says.

If the program isn’t very strict with refrigerators, dishwashers and other household appliances, then it’s downright lenient when it comes to personal electronics. Do you have any idea what the Energy Star label on your LCD TV signifies? It’s a sign that your television falls within Energy Star guidelines when it is turned off. As you may already know, nearly every gadget you own continues to draw power when it’s not even on. That’s because it’s actually in a kind of waking sleep known as standby mode. Though turned off, your TV has one eye open waiting to react when you press a button on your remote control. Your DVR stays constantly aware of what time it is in order to spring back to life to record your favorite shows. The Energy Star seal simply says, yes, this product has a standby mode we approve of. It is in no way a measure of how much power is used or wasted when the product is actually being used.

Even without Cash for Clunkers, the impetus for buying a fuel-efficient automobile is the money you save at the pump. The savings are immediately felt, and are in some cases quite substantial. Not so much with gadgets. According to Schneider, I wouldn’t see a huge difference in my electric bill if I went out today and purchased the very latest Energy Star-compliant everything. I’d see a difference, but a marginal one. That’s because there’s no gadget equivalent to the hybrid, which can double your energy efficiency, or the CFL light bulb, which improves it by 75 percent. Why? Because no one is telling manufacturers to innovate, and no one is giving us money to be able to afford these innovations.

Then, there’s all that Energy Star doesn’t consider. As its name belies, the program is primarily concerned with power consumption. Though it takes water usage into account for appliances like clothes washers, water heaters and dishwashers, it does not consider the environmental impact of manufacturing processes, materials used, or what happens to a product at the end of its lifespan. Nor is there any Energy Star-equivalent government program that does. So, our only measure of gadget greenness couldn’t care less if your TV poisons the ground, liquefies the poles, and kills a bald eagle once it’s thrown away. (According to Schneider, this is something Energy Star is starting to discuss internally.)

This isn’t an indictment of Energy Star. I think we need to appreciate all the program has done since the darkest days of mankind’s environmental irresponsibility. It works very well as a base level of green compliance, and it works very well for bigger energy- and water-guzzling appliances. But I also believe something more is needed — particularly in the realm of personal electronics. As it is, there’s little to no incentive for manufacturers to make their products more eco-friendly, and there’s little incentive for consumers to buy them. Today, corporate environmentalism in the tech world is driven by publicity and the fear of bad publicity. No one forced Samsung to make its Reclaim handset out of 80 percent corn. And remember what forced Apple to minimize its packaging and reduce its use of hazardous materials? It wasn’t the government — it was a public lashing by Greenpeace.

A second tier of Energy Star compliance currently being called “Energy Superstar” has been proposed, but that’s about all anyone knows about it. This is a step in the right direction, but to have any kind of impact at all it needs to do the following: It needs to raise the bar of energy efficiency to the point that I feel real savings on my utility bills. It needs to get serious about personal electronics and measure their efficiency when they’re actually turned on. It needs to consider how products affect the environment when they are manufactured and when they no longer function.

Of course, no one is going to make an Energy Superstar product if they can’t sell it. And this is when a gadget version of Cash for Clunkers could actually work. Mr. Obama could fire up the printing press and hand us all crisp new bills for our aging tech. We’d buy Energy Superstars knowing we’d see real returns on our electric bills. For smaller electronics, where energy efficiency is less of an issue, we’d be encouraged to recycle. Meanwhile manufacturers would have a reason other than PR to innovate.

Incidentally, a Cash for Clunkers program for larger home appliances is actually in the works, and should be stuffing paper in your wallet by the beginning of next year, says Schneider. As part of the economic stimulus plan, Congress set aside $300 million (yes that’s million, not billion) that will be divided up among the 50 states. It will go toward rebates of about $50 to $100 for consumers who trade in their old dishwashers, clothes washers, refrigerators and HVAC systems for Energy Star models.

Until a similar program exists for tech, there are private programs that will take your old gadgets in exchange for cash. You won’t get much money and you’ll do nothing to spur the development of more eco-friendly products. Nonetheless, they put money in your pocket and get your stuff recycled.