Want your pace but don’t want to be a ‘Podhole? Nike’s got something for you. 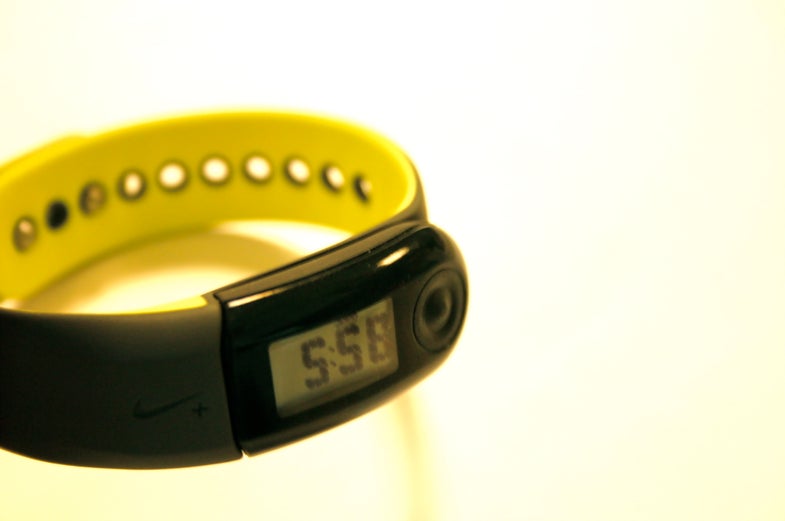 While I love my fancy Garmin watch, most runners don’t need $400 worth of tech on their wrist. That’s why the Nike+ iPod system is so brilliant: cheap, stupid-simple and gives you the basic info—time, pace, distance—automatically uploaded to Nike’s training site. Which is why the utter lack of innovation since the system debuted more than two years ago has been disappointing. Now, Nike’s finally released the long-rumored Sportband, which opens the Nike+ world to the handful of people out there who don’t run with iPods. With it, Nike proves they can do sleek and simple products even without Steve Jobs’s help.

My first impression upon strapping on the hard-rubber black and bright yellow (enough already; Lance is awesome, we get it) band is that it’s more comfortable than I was expecting: I barely noticed I was wearing it. It’s also nearly as simple as its iPod-based cousin. The one caveat: You have to download a program for your computer before it will recognize the pull-out USB key that stores your runs. I had to discover that in the instructions, which I prefer not to have to read. (Although, to be fair, the Sportband’s instructions are just images, so I still didn’t have to “read.” Touché.)

On the run, one button starts and stops, the other switches among pace, distance and time. The display is easy to read, but it could use a backlight or higher-contrast option for dawn and dusk runs. The uploading was automatic and it let me tie this sensor into my existing Nike+ account with no muss. The Nike+ site is a little too candy-graphic for my taste—Garmin’s does a better job of cleanly delivering information—but I suppose Nike figures most of its users aren’t mining the data, they just like the pretty moving charts.

The $59 price seemed steep, until I realized it’s still nearly $100 cheaper than the cheapest iPod with a Nike+ kit, or any other pace- and distance-measuring watch. One word of advice: Be sure to use the calibration feature. Run a mile or two on a track and if the Sportband registers anything different, correct it under the Settings tab of the uploading application. My unit was about 10 percent too generous with the distance (exactly the same as my Nike+ iPod system) until I calibrated it; now it’s nearly spot-on. (In Nike’s defense, this may have something to do with my wearing non-Nike shoes and stuffing the sensor under the laces instead of under the insole, as intended.) Attention Nike: add a $25 heart-rate monitor accessory, and you’ll have my loyalty for life.