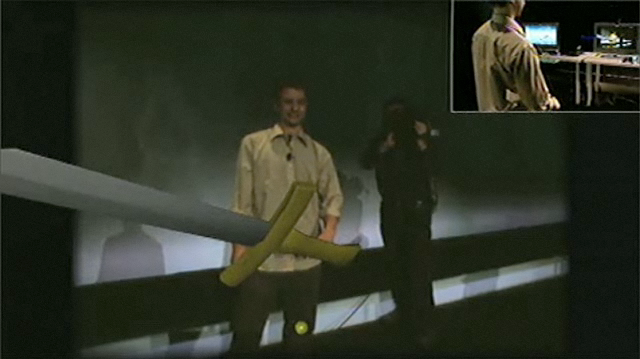 After Microsoft’s announcement at the E3 conference of Project Natal, Sony unveiled its own version of motion-capture gaming, both playing catch-up to Nintendo’s Wii. Using the Playstation Eye camera and a colorfully globe-tipped controller, the new hardware claims to allow true 1:1 motion response. It can not only recognize where the controllers are in relation to each other, but also in relation to the screen, creating movement response in a true 3D world. This could yield some interesting gaming experiences once fully realized.

The press conference showed off some of the potential uses of hardware in a virtual world directly out of a Dire Straits video. Showing a range of mocked-up uses such as sports, weaponry, and novel gaming controls. The most intriguing uses, though, seemed to be the ability for writing and drawing that requires fine movement control and the ability to switch between first person and third person views.

The announcement came after XBOX’s Project Natal system Monday, which allows for full body motion capture without controllers, and Nintendo’s new Vitality Sensor for the Wii. Both Sony and Microsoft have a long way to go in order to capture the lead from Nintendo which has a solid head start in this market. It will be interesting to see if Sony’s introduction of precise motion control, projected to be released next Spring, will win over gamers enough to get them to buy additional hardware for an already expensive system.