Night Riders Rejoice: Infrared Vision in the Works for Motorcycles

Patent drawings from Kawasaki uncover a new night-vision system that'll give riders a view beyond a bike's conventional headlamp. 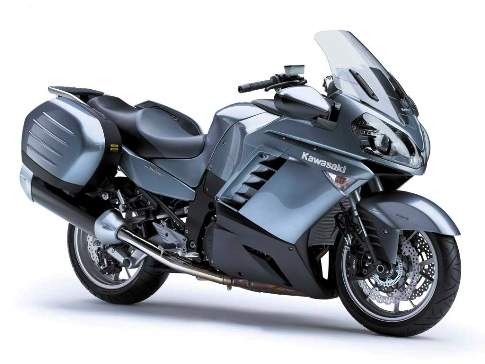 New motorcyclists are taught early not to out-drive their headlamps. Now, night riders (of the non-Hasselhoff variety) may soon owe Kawasaki a debt of gratitude for improving their safety after dark. The Japanese bike builder is reportedly fast-tracking new infrared night-vision technology to use on production motorcycles. Drawings uncovered by Gizmag show Kawasaki is using its 1400 GTR as a test mule, playing into its position as the Kawasaki line’s most tech-heavy machine.

The system works much like a similar car-based system from BMW: Two infra-red cameras mounted at the bike’s mirrors face forward, detecting objects and feeding the data to the GTR’s computer to judge the objects’ distance. One of the cameras also portrays the forward image on an LCD screen on the GTR’s instrument panel. The system is designed to work with new bikes as well as retrofit to older models, making it a viable aftermarket upgrade. Kawasaki has already prepared very detailed patent filings on the system, and Gizmag reports one of the lead designers of the GTR, Kaoru Kouchi, is also working on a helmet-mounted, heads-up display that will work with the new technology.