Microsoft Vine takes the trivia out of tweeting 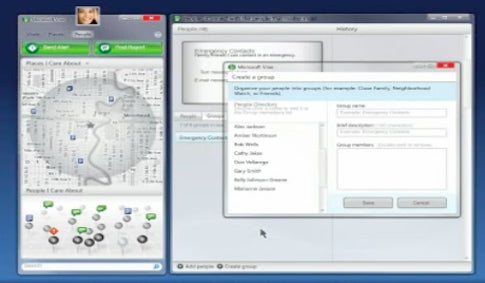 Emergency response entails a widespread tactical effort by countless government agencies. Too often, citizens are left out of the loop and have to rely on mass media, cell phones, and Web sites for emergency information. Microsoft Vine is a new social networking tool, designed to help its users keep tabs on people and places. Currently in a beta test in Seattle, the service lets you enter a location and see news reports aggregated from 20,000 sources, and from the United States National Oceanic and Atmospheric Administration. You can enter people you want to track into Microsoft Vine, and then receive an e-mail, text message, or an update about them in the Vine dashboard — which runs on Windows only. Disaster victims with Macs are out of luck.

A map overlay in Vine shows the cities you want to track and the locations of people you have entered into the software. As with Twitter, you can update your status — which feeds directly to your Facebook account — and let people know where you are. You can also issue a report with emergency contact information, where you are going, and how long you will be gone. The potential strength of a system like this is that it cuts through the clutter of social networking updates about who won the latest soccer game or which band you like — it is focused entirely on emergency situations.

But Microsoft Vine will only work if it becomes the most popular portal for updating your whereabouts in an emergency. People have already used Twitter to alert family and friends about emergencies. However, Microsoft can draw from its experience on the EagleOne project (which is more of a coordinated data consolidation project for emergency response) to beef up the Vine social network with more data about catastrophic events. Vine apparently does not use traditional GPS-based location-awareness techniques. Twitter’s iffy reliability makes it less than ideal for critical emergency communications; Microsoft promises vaguely that Vine will be more robust.