Why did The Grouse throw his gadgets in the landfill? 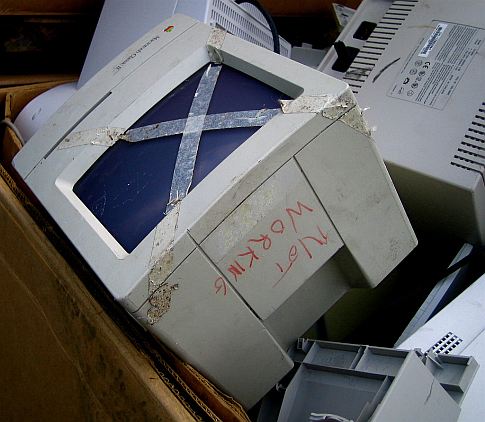 With environmentalism being so hip and fashionable these days — particularly on the corporate level — every day kind of feels like Earth Day. Every other ad I see on TV is from some polluter-cum-born-again-environmentalist company touting its commitment to our planet. Every other news story concerns a company or municipality taking new measures to reduce its impact on Ma Nature. Everywhere I turn, I’m being force-fed tips on how to “green” this and how to “green” that. The message, and more specifically the word “green” itself, have become so saturated that they’re practically meaningless.

Environmentalism has been co-opted by big business as an advertising slogan to the point that it’s becoming ignorable, which leads me to the point of this particular diatribe: I’m not retaining any of it. Yes, I know pollution is the bad guy, but when it came to disposing of some old gadgetry last week, I realized I had no idea what to do with it. I know I should recycle old tech, but I don’t know how. The Earth Day message — the one of genuine environmental consciousness — has been drowned out by all of the noise. Death by buzzword. I can only hope that what I’m sharing today cuts through some of the static, rather than contributing to it.

Very recently I moved to a new apartment. While unpacking boxes, I came across some old electronics I no longer have any use for: two defunct iPods and an aging but still functional digital camera. While setting up my home office, I took the opportunity to replace my printer cartridges, leaving me with two empty ones. What am I supposed to do with all of this junk? There’s a foggy sense somewhere in the back of my mind that I’m not allowed to simply throw these in the garbage, but I’m not sure why. Where I’m meant to chuck them, I haven’t a clue.

OK, so I plug the iPods in to charge them. One of them responds, the other doesn’t. Once the “good” one is fully juiced, I plug it into iTunes, but gather after three failed restore attempts that it’s beyond resuscitation. Against my better judgment, I throw them both in the trash. I move onto the printer cartridges and recall seeing a collection bin for them down at the local Staples. I walk the 20 blocks down to my nearest Staples, only to be told that this particular store no longer participates in this recycling program. So, I walk outside and throw them in a garbage can. Perhaps I can do the right thing with the digital camera. I spend $20 on new batteries for it (yes, it takes store-bought batteries!), I throw the camera, an extra battery, the USB cord and an empty SD card into the carrying case and I walk it down to Goodwill hoping it will land in the hands of someone who truly needs it. Instead, my donation is received like a pair of used socks — the guy behind the counter can’t even be bothered to look at what I’m handing him. Hey, I don’t expect a parade in my honor or anything, but it would be nice if Goodwill at least acknowledged the fact that I’m trying my best to be both environmentally and socially conscious instead of doing the easy thing — dropping this camera in the trash bin.

Long story short: Despite being bombarded a hundred times a day with calls to go green, my attempt to recycle old tech was a complete failure. I wasn’t exactly sure why I was supposed to be doing it. I wasn’t sure how I was supposed to be doing it. And once I did go way out of my way to figure this all out, the result was both futile and unsatisfying.

I’ll keep this as brief as possible, but the reasons for recycling dead tech are numerous. These are just the Cliff’s Notes, of course:

Alrighty, how do we recycle this stuff, then? Unfortunately, there’s no easy answer — and by easy, I mean convenient. That’s because, surprise surprise, U.S. legislation is decades behind where it should be on the matter. The only real federal law on the books concerning electronic waste is the Resource Conservation and Recovery Act, which dates back to 1976 and is limited to the disposal of CRT monitors. Thus far, it’s been up to the States to govern the recycling and disposal of old gadgets and, as you’d expect, the laws vary quite widely from “not giving a crap” to “giving somewhat of a crap.” Yes, you can bring your old tech, batteries, electronics and other wired thingamajigs to certain participating stores (Home Depot, Lowe’s, cell phone provider storefronts, some Staples), but that takes effort. Effortlessness kindles acceptance, and so I’d like to see it work kind of like the current recycling program for paper, metal and plastics we have here in New York. I throw paper in the green bin. I throw plastic and metal in the blue bin. How about another bin I can chuck a dead iPod into? If it were that easy, it would be no trouble at all to do the right thing.

If you are willing to put a little bit of effort in, there’s a solution already out there and it’s way better than anything that’ll ever make its way into law. It’s called RecyclingForCharities.com, and I really wish I’d been aware of it before I tossed my iPods in the Dumpster. Collect your dusty old tech — everything from PMPs and cameras to phone chargers and extension cords; as little or as many as you’ve got — print out a shipping label from RecyclingForCharities.com, and drop it in the mail on their dime. Then choose one of 150+ charities that your donation benefits. If a gadget can be refurbished and salvaged, it goes back into reuse. If it’s all the way dead, it’ll be broken down to raw materials and sold for cashola. Someone in need gets help. Planet Earth suffers a bit less. You get a tax write-off.

I spoke with founder Dwight Zahringer a bit and he’s currently pooling all iPod donations into one collection in the hopes of giving them to children in hospitals. Yup, I’m a total jerk. I hope you can do better.