Inside an Inkjet Photo Printer

Every time you hit "print," this $100 inkjet lays down thousands of droplets per inch of paper, with microscopic precision 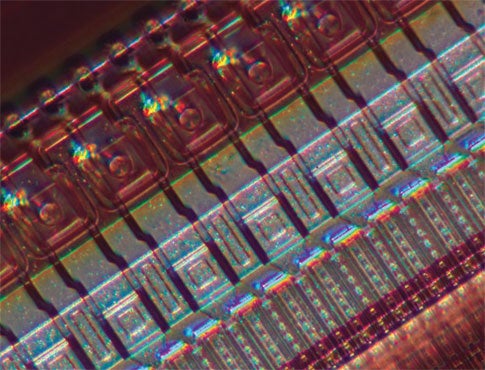 Even today’s budget-priced home printers churn out quality photos that a few years ago you could have gotten only from a professional printing house. Key to the high quality are steady improvements in print heads, which can eject smaller and smaller droplets of ink with ever-greater precision.

A decade ago, eight-picoliter drops (that’s eight trillionths of a liter) were considered small. These days, inkjet printers deliver drops as tiny as one picoliter through thousands of nozzles—some less than half the width of a human hair.

To make prints that look like photos instead of finger paintings, the printer must precisely control how much ink comes out of every nozzle, every time, at a rate of up to 22,000 drops per second.

Two types of technology can squeeze ink through the nozzles.

Canon and HP use a thermal process. The printer’s electronics send precise charges to a resistor at the back of the nozzle, which heats the ink until it bubbles out

Epson printers use disks made of a piezoelectric material, which flexes when current is applied–first drawing fresh ink into the nozzle, then pushing it onto the paper

Up Close and Colorful

Here’s an intimate look at what’s happening inside your image-making machine. 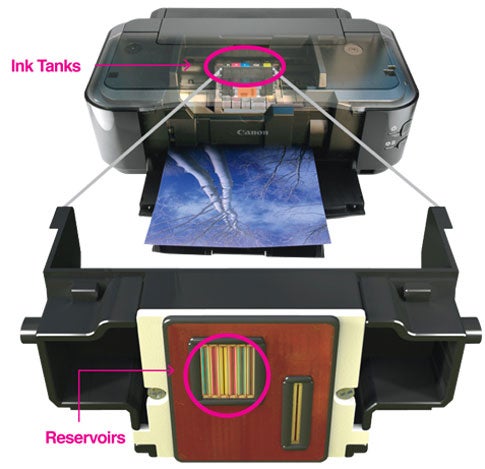 The various colored inks feed into the print head as it moves back and forth across the paper. The print head holds ink in long channels before the nozzles eject it 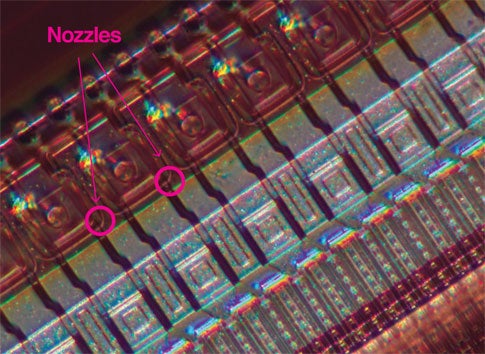 Get Ready for Paper

Openings on each side of the reservoir eject the ink

Canon’s printers use thermal nozzles, which can all be a single capacity, such as three picoliters, or various sizes, like one, three and five. Smaller drops render fine details like eyelashes; larger drops cover broad areas such as a blue sky. Software on your PC and printer decide which nozzles to use based on features in each part of the image, and the print head lays down all the necessary colors in a single pass.

Don’t just unplug your printer; always turn it off using the power button. When you do, it places protective caps over the nozzles before shutting down. This helps prevent clogs due to ink accumulating in the print head and drying out.