The 2.0 version of the ebook reader is slimmer, handsomer, and easier to use 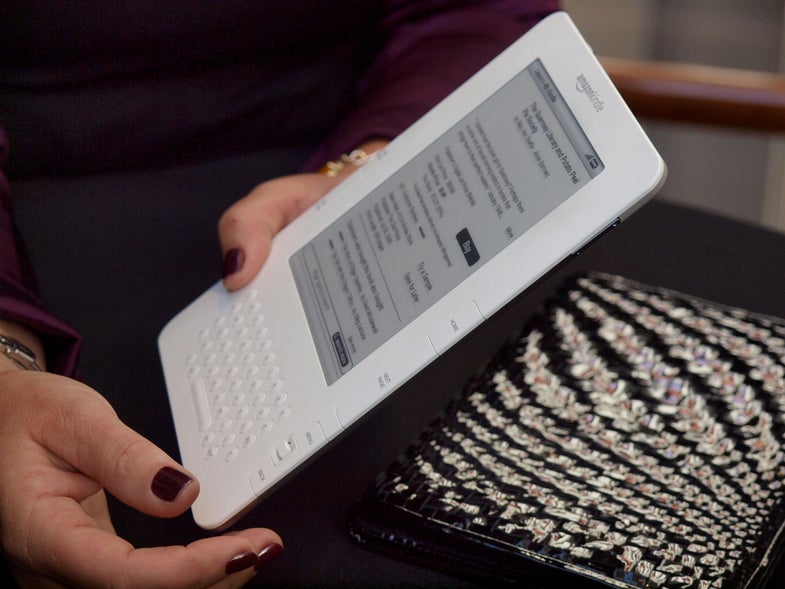 The new, ultra-thin Kindle has a better screen and much better navigation. Sean Captain
SHARE

Make no mistake about it: The original Kindle ebook reader was an amazing device — the first ereader to engender feelings of love. Tying a lightweight screen to Amazon’s book collection with a free 3G wireless connection was genius, and easily earned our Best of What’s New kudos.

But the original Kindle was by no means a looker. Its wide, clunky buttons seemed to have been placed at random, with the sole intention of making them easy to press by accident. The four-level grayscale e-ink screen was fine for text but made photos (say, from newspaper articles) look like really cheap Xeroxes from the library copy machine. And navigation was sluggish.

Kindle 2.0, introduced today, is what 1.0 should have been. It’s an amazing 0.36 inches thin — making the 0.48-inch iPhone look chunky. (In fact, 2.0 looks eerily like an oversized original iPhone in its dimensions and two-tone back plate.) Buttons now tilt inward, meaning you’re a lot less likely to bump the edge and accidentally advance to the next page. And a new 16-shade grayscale screen renders handsome black and white photos.

It works better as well. Gone is the odd scroll wheel that moved so much faster than the lethargic screen refresh that I typically overshot what I was looking for. In its place is a joystick that lets you zip the cursor around text — to select words and look up their definitions, for example. It also makes newspapers easier to navigate. While you’re reading one article, you see can push the joystick to the left or right to scroll through headlines of other articles and jump to them. Or push down on the joystick to get a list of all the newspaper sections.

Kindle 2.0 also introduces a text-to-speech function that reads aloud anything on the screen. Though it lacks real intonation, the voice does sound much better than the 1950s android-style speech you might expect.

Curiously, the Kindle plays this audio over stereo speakers. Overkill? Or can we be expecting real eBooks and maybe music downloads in the future? And in case your neighbors aren’t as fond of robospeech as you are, you can plug in a stereo headphone.

Content offerings include 230,000 books for $9.99 or less (including 103 of the top 110 on the New York Times bestseller list). Among those titles is an exclusive on the new Stephen King novella Ur, perhaps the first literary infomercial. The horror writer showed up at the unveiling announcing “I’m the entertainment portion,” and recounted how Amazon asked him about a month ago to write a story specifically for Kindle.

King read aloud a portion of Ur in which the protagonist, a university literature professor, first encounters the Kindle in the hands of a student. He chides the young man for reading from a computer screen, but the student fights back, explaining all the wonderful advantages of this Kindle electronic reader, finally saying “You ought to get one.” The entire class cheers when the professor says that he “just might.” For anyone who believes in the separation of literature and commerce, Ur certainly will be a horror story.

But with 229,999 other books on offer, there should be some enjoyable reading available for most anyone.

Amazon also expanded its selection of newspapers and magazines, including USA Today and The New Yorker, and it has grown the number of blogs that are available for automatic updates, including our pals over at gadget site Gizmodo.

Kindle 2.0 is available for pre-order now at amazon.com/kindle2 for $359 and will start shipping on February 24th. Customers on the waiting list for the long sold-out Kindle 1 will get an automatic upgrade to K2, and current K1 owners move to the front of the line if they order a K2 before midnight Tuesday.

Here are some other key specs:

Storage: 2.5GB internal storage with space for about 1500 books