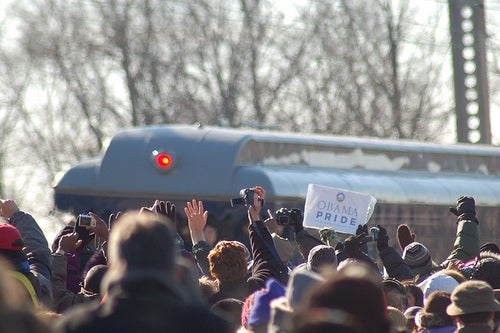 If you’re planning to be anywhere near D.C. on Tuesday, don’t be surprised to experience some cell phone trouble. Government officials aren’t the only ones bracing for record-breaking crowds in the nation’s capital for president-elect Barack Obama’s inauguration. The wireless industry is also preparing for a possible network overload.

To cope with the crowds, wireless carriers are working with government agencies and adding technicians to monitor networks. In addition, COWS (Cells on Wheels) and COLTS (Cells on Light Trucks) are being herded into the area, adding additional wireless capacity. Companies are also enhancing in-building wireless coverage around the capitol and adding more radio channels to boost cell sites.

Still, carriers warn a surge could happen. “Despite all the industry’s efforts to increase network capacity, it’s really important for the public to understand that unusually large crowds can generate congestion and communications delays,” says Steve Largent, President and CEO of CTIA-The Wireless Association. “Think of a wireless network like a highway. Even though we’re building more lanes, if millions of people jump on the road at the same time, there could be a traffic jam.”

To help prevent such a jam, wireless carriers are asking individuals in and around D.C. to take steps to decrease wireless demand. Instead of calling, try sending a text message and resist the urge to send photos or video of the inauguration until after you’ve left. And should cell phones stop working, make sure to designate a meeting place for your party. No one wants to get lost in the crowd.